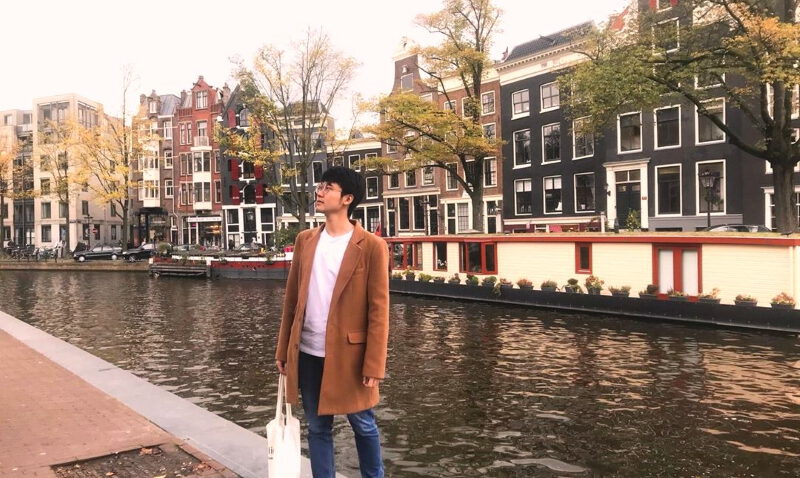 ‘In the Netherlands I learned to express my opinion’

Korean student Junyuk Lee studied at Windesheim for six months, after his trip he sees his own country in a different light. Junyuk tells his story to Windesheim student Anna Garritsen. The interview is part of Windesheim’s project Storytellers in a diverse world.

‘I now see Korea in a different light’

Anna: “Junyuk is a fourth-year student at Incheon National University of Korea. He came to the Netherlands last year to improve his English and really enjoyed the time here. He made new friends, got a side job, and slowly but surely became a better version of himself. But due to the corona pandemic, he had to return to Korea earlier than expected. ”

Junyuk: “I decided to study abroad. Previously I had traveled alone as a tourist. I have already visited many countries in Asia and America. But I had never had the chance to visit Europe. It was also special to take a major in the Netherlands.

My main goal was to learn to speak better English, I was very bad at that. In Korea, the focus is on grammatical knowledge and learning to read. So Koreans understand what someone is saying, but they don’t know how to respond. The only way I could improve my English was to study abroad.

Obviously, my first idea went to America or Singapore. But then my friend recommended the Netherlands. He told me that the Dutch speak English almost fluently. My first thought went to the Dutch football coach Guus Hiddink who in 2002 managed to bring the Korean Team to the semi-finals. This makes him a hero to Koreans. What else did I know about the Netherlands? Windmills! Tulips! I decided to study in the Netherlands. I was pretty nervous about it before I went. But also enthusiastic.

Big gentle giants
I had no idea what to expect from the Netherlands and Windesheim. I was afraid that I could not make friends with the Dutch because of the cultural differences. But this fear turned out to be unnecessary, because the Dutch are very nice! They treated me like friends from the very first meeting.

Hierarchy is very important in Korea. You should always be polite to people older than you. This sometimes makes it difficult to make friends. So I was very surprised that the Dutch did not ask my age. Many people did not even know how old their friends are. Fortunately, it turned out to be easy to make friends.

I totally didn’t expect everyone to be the size of giants. Before I came to the Netherlands, my friends told me how long everyone was in the Netherlands. I didn’t believe them. I thought okay, they might be long, but probably not THAT long. But … it was. I still remember how my Dutch classmates stood around me: they were far above me. It was intimidating. In Korea I have an average height, but in the Netherlands I was a little one. Once a Dutch bar owner even thought I was about twelve years old!

I also wanted to learn Dutch. My friends first taught me a few Dutch curse words, such as sokkal … soukel … sukkel! Korea and the Netherlands are two completely different countries. The Dutch are very carefree and, even though they work hard, they are quite slow. Koreans, on the other hand, are constantly in a rush.

The main difference between our countries is everyone’s high school experience. Apparently the Dutch secondary school is fairly relaxed and normal, and teenagers have a lot of free time. How nice that must have been. Korean high school is hell. There, academic success determines your full future.

School pressure already starts at primary school. You have to get high marks, but the mutual competition makes this difficult. In the Netherlands, every student can get a high mark, as long as they make few mistakes. But in Korea, the numbers are determined by how well everyone is doing. Only thirty percent can get high marks. This means that if you make just a few mistakes, you can still fail. Because of this, teens hardly have time to be social.

I started my high school day studying at 7:30 am. I took my classes, ate lunch in twenty minutes, and used the rest of my break to study. When I got home at 4:00 PM, I continued studying until I went to sleep.

As a teenager I had no time for friends, sports activities, or my personal development. I felt trapped … like I was in jail. This high school experience was the worst time of my life. Many Koreans will agree with me. It’s the reason a lot of freshman university students skip lessons and party all night long, that’s to catch up with their youth. I also feel like I missed out on a lot of normal teen things.

I was really looking forward to my second semester at Windesheim. My English had already improved a lot. My Korean accent changed to a Dutch accent. I had no trouble keeping up with the English lessons anymore. Far from Korea, I felt very free. But then corona knocked on the door.

I didn’t want to go back, but I had to. I was supposed to study at Windesheim for another semester, but this was cut short. The corona pandemic made it impossible to live in the Netherlands; I could only go to the supermarket and to my side job at Pathé. But eventually even the cinemas were closed and I lost the job. That was the moment when I thought it was better to leave and go back to Korea.

I was not happy or sad that I had to go back at that point. I just had no choice. Leaving was the most logical option. Even though I had only lived in the Netherlands for six months, it was sad to leave everything I had built up. I would have liked to gain so many more experiences.

Once back in Korea, I had to spend two long, depressing and isolating weeks in quarantine. My days consisted of sleeping, eating Ramyun, watching YouTube videos, and reflecting on my time at Windesheim.

I was pretty sad to be back in Korea. I had made so many good friends in the Netherlands. And it wasn’t until I got back to Korea that I realized how much I had changed. Korean people are very indirect and expressing your opinion is seen as rude. You shouldn’t correct someone older than you, even if they make a stupid mistake. As you probably know, the Dutch are completely the opposite, they are very direct. This taught me how to express my voice. Now that I am back in Korea I have apparently become more direct. Koreans probably think that’s crazy. But I am happy with who I am. I am now more open to different cultures and types of people.

“I am happy that I came into contact with Junyuk. Because I want an exchange to Korea for my minor. The interview was a good opportunity to get to know a Korean student and Korean culture. The East Asian culture appeals to me, but my knowledge of Korea was limited. Talking to Junyuk helped me understand the culture better. By learning about other cultures, you can also learn about your own culture and your own standards and values. ”

Junyuk’s story is one of three true stories about diversity that WIN publishes. WIN chose the three best stories from last semester, which were written for Windesheim’s project Storytellers in a Diverse World. In the project students write down the life story of a fellow student.

The aim of this project is to make students positively aware of what diversity entails and to learn how to deal with it professionally. Teacher Floor van Renssen of the study program Teacher education in Dutch: “Diversity and ‘being different’ is a difficult theme in the classroom. The fear of stigmatization and polarization is lurking. Teachers and students doubt: should I even name the differences I see, or do I perhaps hurt people by doing so? The recorded stories can give rise to different conversations about diversity and inclusion in education.”