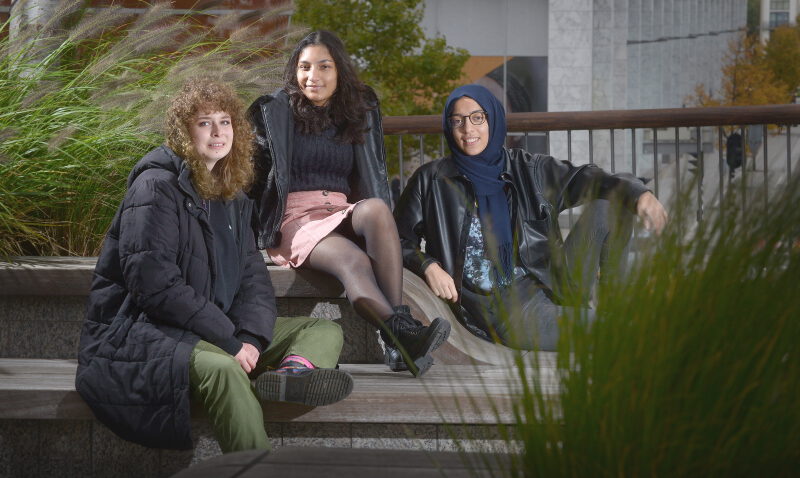 “The Netherlands is racist and we need to deal with this together.”

The death of African Americans due to police violence has created quite a global stir. Three Social work students from Almere (Trisha, Julia and Shaïmaa) want to contribute to a world without racism. That includes taking a critical look at their own study programme.

The idea came from teacher Astrid Broekman. After the violent death of George Floyd, at the end of May, she called upon first-year Social work students through an e-mail to come together. To what extent were they affected by this? In what way did they want to contribute? About fifteen students replied to her message. One of them was Trisha Jaddoe. She was deeply touched by the Floyd case. “This does something to you. I am not of Dutch descent so it hit me personally. You want to do something about it. This e-mail helped. If you have gone through things at your school or near you, you want to be there for people who are going through the same thing.”

Broekman organized three online world café meetings. From the total of fifteen interested students, a core of three remained interested to do more than just talking about things: Trisha, Julia van den Wijngaard and Shaïmaa Benseghir. For Julia, the fight against racism is an important part of her life. “I was already a supporter of the Black Lives Matter movement and I am a firm opposer to Black Pete.* I express this too. When I saw this e-mail, I thought: Great! Now I can express my opinion at school as well and it might even influence things or bring about change.” Shaïmaa followed the Black Lives Matter movement from the very beginning. “From the death of Trevor Martin onwards. As a Muslim woman, I know what it feels like to be discriminated or excluded and I feel that it is my duty to support the black community in this fight.”

Trisha: “I am not of Dutch descent so it hit me personally.”

The three students meet through Teams, every other week. Julia: “Up until now, we have been doing a lot of brainstorming about what we could organize. We came up with a movie club where movies are shown that deal with racism or discrimination. Another idea was to set up a central point of information or a specific Instagram page. We think it should be possible to do something about the curriculum and invite speakers.” Shaïmaa: “I was especially in favour of the latter and doing it after a movie so that it can be discussed. It is important to invite someone who represents the community in question, someone who is personally dealing with racism and discrimination.” At the same time, Shaïmaa emphasizes, we are dealing with questions like; who are we, how do we present ourselves, why are we doing this? “We need to, in other words, create our own identity.”

Are three people perhaps too few for this? Julia: “I am a little disappointed that there is only three of us because you would expect more people from the study programme Social work to be actively involved in anti-racism. I do understand that some people had to quit because they didn’t have enough time… but I still expected more.”

Julia: “I am a firm opposer to Black Pete”

Shaïmaa doesn’t mind that they are starting small. “I actually quite like it. All three of us are very motivated, we work well together and give each other energy. I really feel like we can achieve something and that we will still be together in a year from now.” Trisha: “The teachers were very enthusiastic. We got a lot of reactions like: “So great that you are taking this on and doing something about it.” So even though it is just the three of us, I think it could

get bigger.” One of their points of action concerns the curriculum of the Social Work study programme. It could be improved. Shaïmaa: “To some extent, I am unhappy with the current curriculum because I don’t think it takes discrimination into account, while you do run into it at work. Astrid said that the curriculum cannot be turned around completely. It has to live up to certain rules. However, we could insert new activities or revise assignments so that they essentially remain the same but spend more time on people with a migration background. This could be an assignment about intergenerational work, where young people spend time with people of an older generation. What I notice is that this assignment is very much geared towards the elderly that grew up in the west, not the elderly that came here through immigration. These people have different experiences and need a different approach. I would like to see this change.”

Trisha also thinks discrimination is not dealt with enough within their curriculum. “I think that is a shame and it also makes me angry – it is almost like it is not recognized. It is a big thing and students should spend more time on it. If it were put into the curriculum, there will be more awareness of racism. After all, it is one of the core values of our study programme that people are accepted and respected, regardless of their descent.

Shaïmaa: “If we recognize that the Netherlands has issues with systemic racism, we could move on.”

And that brings us to the tricky question: is the Netherlands racist? Trisha: “When I look at the Black Pete discussion… There are a lot of cold hard facts that show that it is racist but a lot of people refuse to see it. You see it everywhere. So yes, the Netherlands is racist and we need to deal with this together.

Julia completely agrees. “I am from a conservative, reformed village (I still live there) and people who are of non-western descent or wearing their traditional clothing are stared at. The point is, a lot of Dutch people don’t want to think about this. As soon as they are confronted by it, they get defensive. And when things that happen abroad come up, they say: “That doesn’t happen here.” Of course, it is hard to talk about it but by not talking about it, nothing changes!

Shaïmaa thinks this is a difficult question. “To put it briefly; yes, the Netherlands is racist. This country has thrived on two companies (West Indian company and United East Indian company) that made money from colonialism, something that came from racism. This doesn’t mean that I think all Dutch people are racist. If we recognize that the Netherlands has issues with systemic racism, we could move on. Then we can start developing into a community without racism.”

*Black Pete is a part of the Dutch tradition in which Black Petes are helpers of St. Nicolas who at his birthday hand out candy. Black Petes are persons of colour, but traditionally  Dutch natives dress as a person of colour to represent Black Pete. This has been heavily criticized and there have been discussions if this tradition is still appropriate