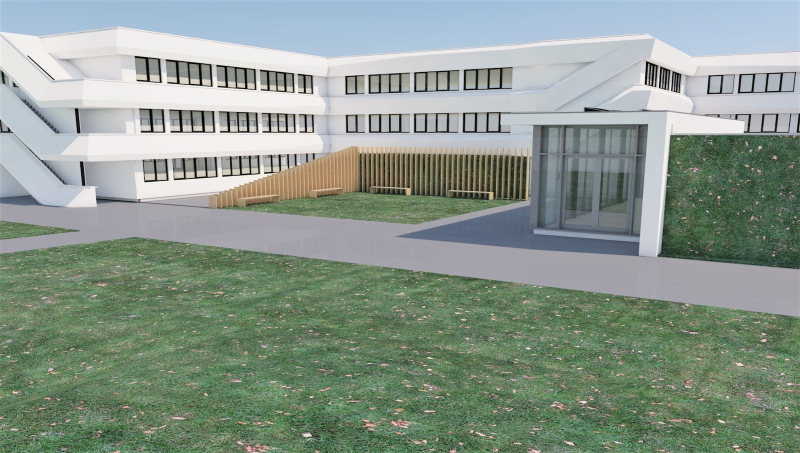 Building B and C of the Windesheim campus in Zwolle will receive a major facelift soon. The renovation works will start this summer and will go on until the end of 2021.

The striking parts of the design, drawn up by the architect bureau LIAG from The Hague, are the wide horizontal facade sections in which the ventilation ducts are hidden. The backside of the main buildings will change the most, where a new glass entrance hall will be built.

The canteen and B building will be renovated first starting this summer, says Fabio Ottenbros from the housing department. Building C is next in the spring of 2021. The old buildings should definitely last for twenty more years after this 15.3-million-euro renovation. The entrance building, which had been built more recently in front of B and C, stays unchanged.

The canteen of the main building will be closed from June to late August, due to the renovation works. The grey plastic hood will be removed during the summer break and in its place will come big flat windows (light lanes) between the roof and the buildings. This will make it possible to view the canteen from the upper floors (see illustration below).

A new entrance hall will be built at the backside of the canteen (see on the right in the illustration below). The glass entrance hall will be behind the current revolving door, in which place is now a pavement between the buildings. To make the entrance more representative, the wooden shed for the garbage containers will be removed. Perhaps underground garbage containers will be built in its place, so that a little park can be built in the area.

The low-rise part of the B building will have a green look, through climbing plants against the fences on the walls (for instance behind the media centre).

The inside of B and C will not be renovated, so the furnishing can stay inside the classrooms during the renovation period. However, the employees and teachers have to work elsewhere temporarily. The empty D building will be used as temporary offices during the renovations. Ottenbros: “We will try to place study programmes in rooms close to each other in the D building. Furthermore, the D building will receive a few big rooms with flexible workplaces.”

The personnel of building B have to pack in the moving boxes before the summer break. During the break, the D building will be furnished and the renovation of B starts directly after the break. The media centre, the shop, and the print shops will stay open during the renovations.

Late April 2021, the users of B building can move back into the renovated building. In the same week, the employees of C building will move to the temporary officed in D. Starting in May, the C building will be renovated. This will most likely last up to October 2021.

The renovation of B and C, which were supposed to start this spring, has been delayed a few months. The reason being stricter regulations of flora and fauna laws by the municipality and the nitrogen crisis.

The flora and fauna laws protect species of wild animals. In Windesheim’s case, an investigation will have to take place to find out whether bats are nesting on top of the to-be-renovated buildings. The animal has not been found so far. However, if it shows up between now and August, Windesheim will have to take measures to make sure it will not be disturbed during the renovations. Previously they feared that the nitrogen crisis would delay the renovation works. But that seems to not be as big of an issue. The calculations have been made and Windesheim expects the renovations to start this summer. The definitive approval from the municipality is expected to be given around June 1st.

Read more about the renovation and other plans for the campus in Zwolle: