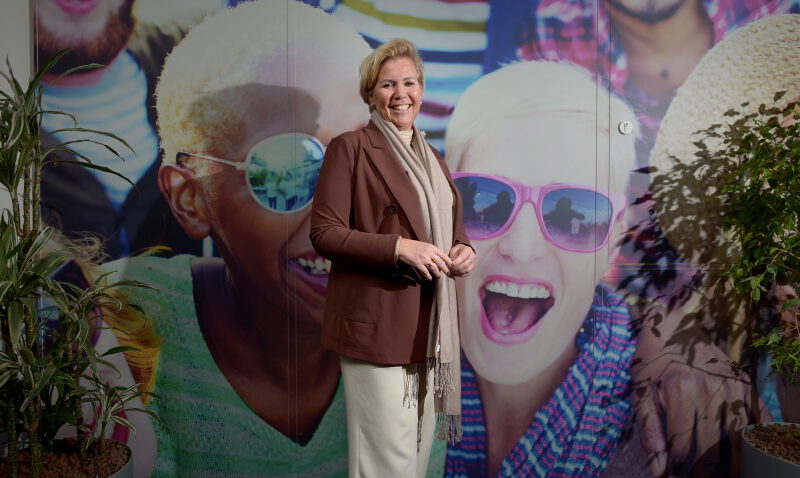 New member of Executive Board Erika Diender: ‘Contribute to correction of division’

Thirteen years ago Erika Diender left the campus. This year she returned as Windesheims second-highest manager at Windesheim: as second member of the Executive Board together with chair Inge Grimm. The introduction, in recent years, to police work and to secondary education has profoundly shaped her vision of higher education.

Let’s go back in time, to the year 2009. You were forty years old, and you had launched the SOS department, a support department for students and education, here at Windesheim – and then you decided to leave. Why?

“You don’t make that decision all at once. I belong to those people who regularly think about the question: What do I want with my life, with my work? And actually I just became curious about the answer to the question of whether I could apply what I learned at Windesheim elsewhere.”

But you didn’t choose another University of Applied Sciences, it became the police. Have the police drawn to you for a long time?

“No not at all. That went a bit via-via. I also didn’t have a good picture of the police organization at all.”

Were the police looking for you?

“They wanted people from outside the police at the top. More women too, and a better reflection of society.”

When I think of the police, I see a very ‘manly’ organization. Very hierarchical too. Did you not regret that switch?

“Regret? Not so much. Did I have a hard time at the police? Sure! The first year was very solid. I didn’t mind the ‘masculine’ at all. It is an organization of ‘don’t talk just do’. If you put forward an idea in education, it comes with the thought: we can think about it. With the police, if I suggested an idea, it was implemented the next day. They really are doers.

But what I missed was intellectuality. For example, in the way decisions are made. If I had a strategic idea, I wanted to discuss it with people. That goes without saying in education. At the police I really had to look for people who could do that. I missed that.”

And did you enjoy working on the street?

“I was thrown in the deep end. My supervisor said: Erika, if you want to work for the police, you have to go all the way. I had no idea what that meant, and in hindsight that’s a good thing. In no time I was in the gym fighting with colleagues. And I took to the streets twice a week. Of course you will come across everything there. And you have to be able to handle that. I can, I know now. But I didn’t know that in the beginning. It has shaped me incredibly. This beautiful University of Applied Sciences is a bubble after all. The world out there is very different.”

What did you learn there?

“Connecting head and heart. Because they can do that very well over there. When you are waiting with your co-workers, ready to get down to business when the 911 calls come in, you have no idea what’s going to happen, what you’re going to face. That can be very intense. There I have seen managers do wonderful things, because they always have to pay attention: how are my people doing? When a serious call came in and everyone jumped up, he said: but you are not going to do that, you stay put! And another had to go. And when I asked why he did that, he said, for example: that is the second serious incident for him this week, he cannot bear that. To be able to do that, you need to know what concerns your people, you need to know their private situation, and so on. That is what I mean with head and heart. Everything you run into does something to you. And to discuss that and to steer it in the right direction, that’s great. Being connected to each other… I value that.”

Can we learn something from the police?

“We are very verbal in education. We try to make decisions by putting rational arguments on the table while a lot is going on underneath. Getting on the table, too, is quite complicated. But actually the most important thing.”

You were, I understand, also affected by the violent things you saw.

“If you have to lock up a thirteen-year-old girl for shoplifting, and that for like the tenth time… I found that very complicated. That’s not going to help at all, I thought. I thought it was dramatic that we did that as a society. But I had no other solution either. So I started doing projects with other parties to come up with something else, different solutions. And at one point someone from the GGD, The Public Health Service, said to me: “You know, Erika, it’s actually very simple. Either things go wrong in upbringing or in education, but often in both at the same time. And if things go wrong in both, between the ages of 12 and 18, try to get such a child back on track!” What can we do about it, I wondered. Intervening in upbringing has all sorts of limits. But education, surely that should be possible?! That idea led to my next step.”

“No. Not from the work. What I got tired of was the development towards the national police. I cannot function in an organization that is run from afar. Then I can’t matter anymore. I really did not like that. When the time came, I had to do things that I didn’t stand for. What should you do then? I left with a heavy heart. But I knew what my next step was: I really wanted to work with the youth.”

You became a director at the Quadraam education group in secondary education. That is a very large umbrella organization. Were you close enough to the problem?

“Sure! There I saw the same painful cases. And then you can take a look with teachers: how do we turn a school into a promising environment?”

Could you get the teachers to go along with you?

“I was really impressed by the enthusiasm of the teachers. And I could help them, for example, by organizing financial resources or by fighting the Inspectorate. You will not achieve your completion rate, the Inspectorate would say. And then I would say: Yes, but they do get their diploma. Many times I won that struggle; not always. This efficiency thinking is deeply ingrained in our society.”

Is society hardening in that regard? Is there less time and money and attention for that group?

“Not so much, but education has always been an emancipatory movement, based on the idea that everyone should be able to learn and study; that everyone was equal. That worked very well for several decades. But in recent years, parents have started to think: if my child does not succeed, then I will help them. And that requires money. They buy shadow education. That’s where it went wrong. Then you get inequality.”

And what impact does that have?

“You see that children who do not have wealthy parents, or parents who do not have time to review their homework, for example, are much less likely to succeed. Thus a divide was created. As a society, we recognized this too late. And now we have to figure out how to correct that again. Then there was COVID-19; that doubled the size of the problem. Now the challenge for secondary education, as far as I’m concerned, is how we organize the school in such a way that we make the support that rich parents who buy shadow education available to children whose parents cannot.”

But that group, isn’t there already attention for them…

“A lot has happened in recent years in the field of transfer, to break down all those old barriers. A lot has started. And fortunately, Windesheim also thinks that is important. It is not for nothing that it has been included in the Strategic Course. But the trick is to continue, to perpetuate and improve that.”

Isn’t the emphasis on the student’s independence, on their own learning path, at odds with what that group needs: good supervision?

“How so? Do you think that your own learning route can exist without proper guidance?”

But if everyone has their own learning path, everyone has something different, can the guidance still be optimal?

“The point is that you, as a student, make agreements with the student counsellor. And then the study counsellor may say: okay, given your circumstances, given your home situation, it is wise that you choose the standard route. But that does not change the fact that it can also be very good for vulnerable students to choose their own learning route. That depends so much on the situation! That is why there is also a lot of attention for the transfer.”

“Sure. Those individual learning routes must fall within fixed frameworks. Because you just aim for a diploma. You can introduce flexibility in many ways, but always while maintaining quality. Young people come here, at an age where they know a little bit about the way they want to develop in. We have to cherish that and we have to do good things with it.”