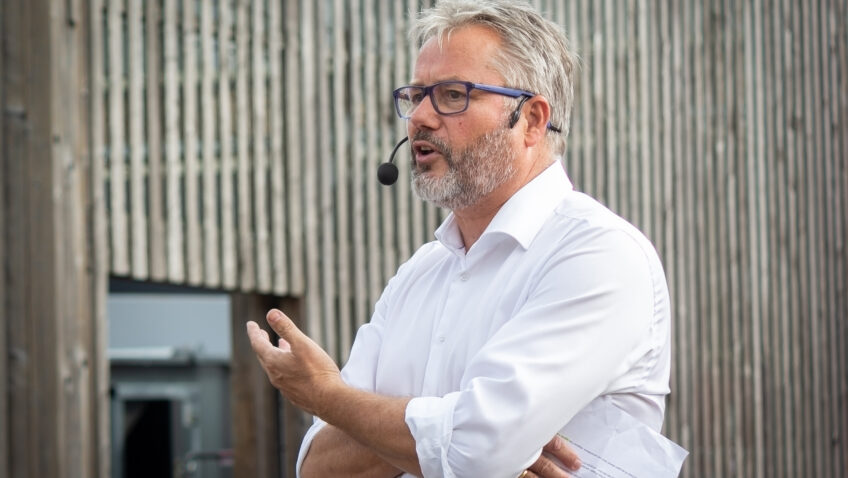 ‘Is it wise to maintain the BSA-norm for new students?’

The new first-year students who are starting next August, have had a year and a half of online education and have barely got a chance to get to know the University of Applied Sciences. How are we going to evaluate them? Henk Hagoort, chair of the Executive Board, wants Windesheim to closely consider this.

The Binding Study Recommendation (BSA) seems to be on its way out. Politicians want it out of the way and the instrument has lost its effect due to the corona crisis. The students who started in 2019 and were confronted with a lockdown after half a year, had their BSA postponed a year to the summer of 2021. Students who started in 2020 now also have a BSA that is postponed. In the meantime, there is a new load of students coming, who have had a year and a half of their secondary education online. How are they going to be graded and evaluated? Henk Hagoort, chair of the Executive Board, is discussing this with the Central Participation Council.

We are slowly going back to normal – will they then also go back to the ‘old-fashioned’ Binding Study Recommendation?

“Look, what you need to consider is that the BSA is not something that is enforced by The Hague. It is a possibility in the law, a choice that you can decide to make as an educational institute. You can wonder whether there are any good reasons for enforcing the BSA for the upcoming students.”

There is a big chance that education can be physical and on campus in September.

“When it comes to that, you know about as much as I do… But even if institutes decide to start up the way they normally do, we still need to consider whether students still have the same starting position as other students. You could state that those students have already had two years of online education at secondary schools. That transition might be extra tough on them. They can also be less sure of themselves in terms of study skills and career orientation. You should also think about the fact that there haven’t been any open days or tag-along days. We have to think about that.”

Will there be a nationwide agreement?

“I think that if the nationwide corona measures are still applied in September, there will have to be an agreement for all institutes. But separate from that, I want to talk about this within Windesheim.

“We have suggested that the Central Participation Council doesn’t rush in answering that question. I think that the answer depends on our decision of how we are going to evaluate the upcoming group of students and the evaluation of the experiment with the transfer norm. As you know, we started the discussion about the Binding Study Recommendation way before the corona crisis broke out. We started an experiment in the division Business, Media and Law with a transfer norm. That hasn’t been concluded yet. If it is up to the Board, that will be extended by a year. We have suggested this to the Central Participation Council.

Is an evaluation not yet possible?

“To really get an idea of what the effects are, you need more time. What we have already seen is that fewer students drop out in the first year. What we could also see just before corona broke out, was that the signoffs for the first of February were a lot lower. That is because a lot of students have the idea that they could catch up on their backlog. That is very encouraging and, in my opinion, shows that we have a good thing going, with a good balance between a threshold on one hand but also preventing students from being sent away unnecessarily. However, there are still some other critical questions: what do students do when they are still allowed to continue into the second year? What if it turns out that they still drop out, which may have been prevented?

“What I can see in the first evaluation is that it is headed in the direction that we expected: the drop-out rate has gone down by ten per cent. It is coming closer to the average drop-out rate of 20 per cent that is inevitable and that you can also see in study programmes with a selection process that is stricter. For example, sports study programmes and the WHC. But we don’t have the solid numbers for year two yet, so it is too soon to take a broad decision about that. You want to convince each other.”

In the meantime, the Binding Study Recommendation is becoming increasingly less popular. Why were the higher eductaion institutes previously very positive about this?

“The sector collectively took the BSA to avoid a very important article of law. This article starts that students have a right to well-founded study advice about their suitability for the job and that an educational institute has the right to send a student away in the case of negative study advice. However, educational institutes have decided to not bring this into practice through extensive talks and content-based advice but through a simple system of having insufficient points.”

You are also an administrative member of The Netherlands Association of Universities of Applied Sciences. How is the discussion about the BSA going there?

Finally: at the moment a lot of students have study delays. In many cases, the Universities of Applied Sciences can do nothing about this – I am referring to the internship places lost. I can imagine that a student will hold the university accountable at some point, because of the measures they are taking. Is that imaginable?

“At the beginning of the corona crisis, we, as a sector, talked to the ministry about the accountability for the study delays related to corona. We decided then that the Universities of Applied Sciences have a duty to actively help students but that the accountability, in the end, lies with the government. In my opinion, the government has also shown that they understand and accept this, considering they halved the institutional tuition. This is conditional on the fact that we make an effort to do what is allowed. It is especially tense because of the grey areas we are entering. At this moment in time, very little is allowed but the government is leaning towards more options, with for example more testing and vaccinations. You have to be careful that you don’t become too challenging of The Hague and say: “The Hague may say this is allowed but we think it is dangerous so we aren’t doing this.” Because it means that we can become responsible.

So you have to discuss this with the sector and with The Hague, and move forward together…

“Absolutely. And that is what we are doing. We have learned a lot when it comes to the past year. As an organisation, we have a board meeting during which we try to get everything aligned. For example, when it comes to testing on location and practical education. Next to that, there is a meeting with our representative minister of the government. All the agreements made with the ministry are registered in a so-called ‘service document’. This ensures that the Universities of Applied Sciences are in agreeance and also aligned with the minister.” (MH)