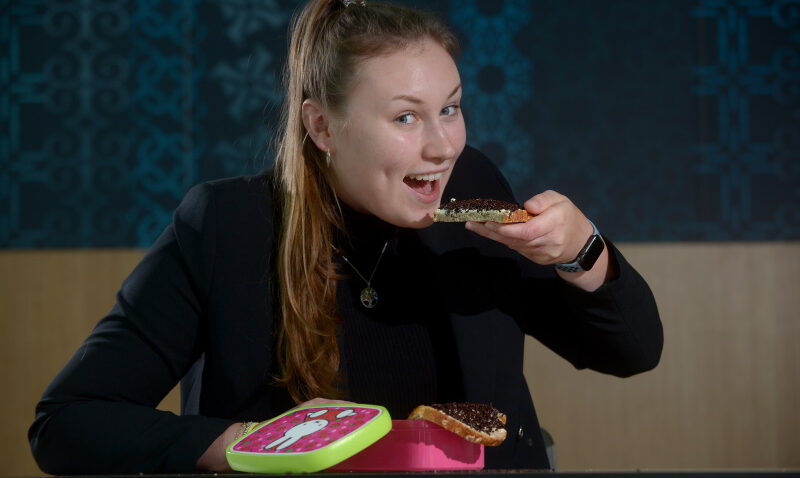 Sandwich with cheese in the lunchbox, without a helmet on the bike and dinner at half-past five. Yes, those Dutch are crazy people. Foreign students about typical Dutch habits and customs:

‘I thought the summer was freezing here.’

Hanrim (student Global project and change management): “The summer in Holland was freezing cold, which really disappointed me. But during a cold day I can really enjoy snert. Dutch food is surprisingly tasty. Pancakes, frikandellen, I love them.” What also strikes her is that Dutch students address their teachers by their first name. “There is no hierarchy, that is very different with us in Korea.”

‘The Dutch throw everything in the fryer’

Freja Smith (at the photo) from England, has lived here since April and loves our chips shop.

Although she sometimes finds the eating habits a bit crazy. “I really had to get used to the Dutch ‘snackbar’ (a chips shop where you can get all kind of fried snacks) and I had no idea what a ‘frikandel’ or ‘kapsalon’ (kebab meat, fries, cheese and other sauces) was. You do throw a lot into the frying pan.”
Also typically Dutch: “So much bread is eaten here every day. During lunch, almost everyone has their own lunch box and Dopper (Brand of water bottles). Hilarious!”
There is a lot of humour in the Dutch language, says Freja (student International business). “I love that. For example, the expression ‘With two fingers in the nose’ which means easy peasy), I think that is so funny!”

‘Everyone keeps their distance.’

How the Dutch deal with ‘personal space’ is very different from that in Spain, explains Clara Lombardía Alonso.

“Everyone seems a bit ‘cooler’ here and keeps their distance from each other. And no, that’s not because of the corona measures. In Spain the manners are just a bit looser, people who are friends touch each other more. So I am used to more physical contact.”

‘In Mexico, we revolve around everything’

“In Mexico, we tend to get around it, if you want to say you don’t like something or if you are criticizing something, for example. I actually like the Dutch way better, it’s a lot easier to just say something straight to the person. That prevents misunderstandings.”
She had to get used to lunch. “In Mexico, lunch is really a meal, for example, soup and tacos, and in the evening we eat something smaller. But I try to adapt, for example, I have started eating bread and cheese.”

‘You can look inside the houses’

The craziest thing about the Netherlands? The windows, says the Italian Vincenzo Morello. Anyone can just look inside!

“Everywhere I look, I see buildings with those big windows. You can see exactly what people are doing inside,” says Vincenzo, who is following the exchange program ‘Doing business in the World’ at Windesheim. “But what immediately strikes me: No one is actually looking inside! In Italy everyone would do that.”
And the weather…? “I think it’s very cold here already! I live in Sicily, where it gets six or seven degrees at the coldest in winter. I took a very thick coat with me in my suitcase. Hopefully, it will be warm enough in winter.”

Shopping in the evening is not an option in the Netherlands, much to the chagrin of Irene Frese (student International business).

“The shops here close super early, around six o’clock! I’m originally from Italy and now I live in Spain, where they don’t close until eight or nine. It is very nice that in the evening, when your day is over, you can shop for clothes in a relaxed manner. So here in Zwolle I only went to a clothing store once at the beginning of the afternoon, that felt quite uncomfortable.”

‘The Dutch don’t eat soup, which is very striking,’ says Szintia Kopocz. “In Romania, where I come from, everyone eats soup for lunch every day.

“I never see anyone eating soup here not even in restaurants. It is of course sold in Dutch supermarkets but they are generally very creamy and tastes differently than at home. A very well-known soup from Romania is ‘Tripe’, says Szintia (student International business). The main ingredient is meat from the inside of the stomach, for example, a cow or pig. I don’t like it myself. Just give me noodle soup.”

Inyoung Kang from South Korea studied at Windesheim for a year. She stayed and now lives with her Dutch boyfriend.

“The Dutch are very direct. It’s very efficient to say what you’re thinking, but it can also come across as rude. The same goes for individualism. I like that no one interferes with my private life, but sometimes individualism tends to selfishness.
Oh, nothing’s perfect. Just like the elections. The Dutch love to work efficiently but there is still no new government. I sometimes joke about that.”

The Dutch weather is warmer than the Finnish Samu Pallaspuro had expected.

And a positive side effect, his wallet remains well filled. “It is generally a bit cheaper here, very nice.” Samu, who follows the exchange program ‘Doing business in the world’ at Windesheim, finds the Dutch very friendly.
But there’s one thing he isn’t a fan of. “You don’t wear a helmet while cycling here, not even on a scooter. A helmet is relatively cheap, when you consider that it can save your life. It protects your head when you fall off your bike. At least let the kids wear one.”

In France, Manon Sansone was used to taking the bus or metro. “But there is no metro in Zwolle and all buses run very large circles.

“So it takes you a long time to get somewhere. That is why I rent a ‘Swapfiets’ (a bike that you rent for a certain amount of time).”
Manon (student International business) hardly dares to tell, but she has already been involved in a bike accident once. “Someone in front of me suddenly braked and I crashed into him. No one was injured and all bicycles remained intact, so nothing to worry about. I think it was especially funny to watch.”

Everything and everyone is very relaxed here, according to Jeanne Gente. “In France, it sometimes seems like everyone is in a hurry.”

“The people in the Netherlands are friendly and open-minded, which is great. And everyone speaks English, which makes it easy to communicate with others. That is often different in France.”
Jeanne, who follows the Teacher Education programme, thinks Zwolle is a beautiful city. “The city is very green with lots of parks and stuff, very cute. I only miss the mountains, everything is flat here. I like hiking and skiing, but unfortunately that won’t be happening this winter.”

Alexandre: “And that’s convenient because I came to the Netherlands to improve my English. In France, everyone only speaks French. People usually don’t even bother to speak another language. If you can’t speak French there, you’re just out of luck.”

‘The Dutch drink a lot of beer’

“The amount of beer that is consumed in one evening in the Netherlands is enormous!” says Kalina Stoeva from Bulgaria. “I don’t know where they put it.

Moreover, the Dutch speak so loudly that they no longer need a microphone. “Especially when they start singing, after that hefty amount of beer I just mentioned.” Something that also impresses Kalina (student International business): “How people reach their room on the second floor without any problems, with so much alcohol in their blood. While I really need my legs and hands to walk up those steep Dutch stairs.”