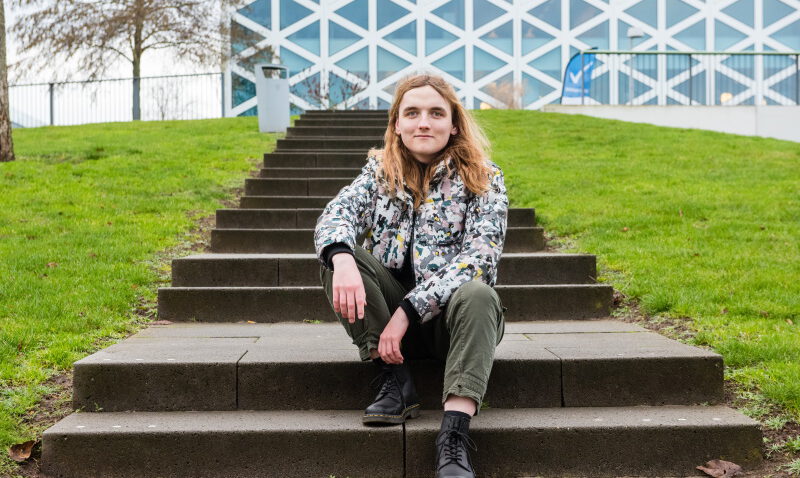 ‘My generation must live again, instead of survive’

Fighting injustice, that’s what student Luna Koops wants. She used to be chair of the Young Socialists and member of the Windesheim Central participation council. Now she is on the list of the political party Partij van de Arbeid (Labour Party) for the municipal elections in Zwolle. “I want to give young people from Zwolle a voice.”

In between her worktimes, Luna (24), third year Teacher education in Physics, has some time for a chat. “It were busy weeks. I was busy with my internship; I teach. And today I’m busy with party affairs. The election program is done, so the plans for Zwolle have been made. Now, we have to make those plans clear to the people of Zwolle. And try to get support. Basically, run a campaign.”

You are third on the list of the Partij van de Arbeid (PvdA). What is the probability that you become a councilor?

“There are currently four seats for the PvdA in Zwolle, so there is a chance that I get on the city council. But it’s not very useful for me to concern over this. Eventually it’s up to the voter. In the meantime, I could much better concern over making Zwolle even more beautiful.”

But suppose you do get into the council. Why do you want that?

“Of course I want to go for it, because I see things around me that aren’t fair in Zwolle. The situation with the housing market is the biggest problem and has my priority. I notice it in my own life as well. I will be graduating soon, but it’s almost impossible to find a house after this. Renting something in the private sector is incredible expensive. The waiting time for social rental housing is seven years. And buying is also getting less accessible. As an ex-student you stay in your student house for a long time. How are you ever supposed to start a family? To solve that, I want to get into the council. But if that doesn’t happen, I’ll remain politically active. For instance, I participate in housing protests and climate marches. That’s close to my heart.”

Why do you think it is so important to do this job?

“I cannot stand injustice. A friend of mine once said: “anger because of injustice is one of the greatest forms of love.” That sums up nicely what my motivation is. I notice men are still getting paid more than women. I still notice people looking weirdly and thinking ‘what are those lesbians doing here’ when I’m on the train with my girlfriend. I notice people have few opportunities at the labor market, while the fixed charges go up. It becomes more and more expensive to live for my generation. You could call it surviving. That’s what I want to stand up against.”

That anger against injustice, have you always had that?

“Ever since I was a child: it started with the end of primary school. Back then, I already had discussions with classmates. In 2010, Mark Rutte became Prime Minister. He had to go up against PvdA’s Job Cohen, whom I’m a fan of. I was already very involved in that competition. And in the subjects that Cohen thought were important. I was twelve, so I’ve been involved with politics for half my life.”

What about the family you came from? Also politically active?

“We talked about it a lot at home, but no one was affiliated with any party. It wasn’t until I became a member of the PvdA at 18, became active and actually a little known, my parents also decided to become member. The situation in my family has contributed to my involvement. We certainly weren’t rich, but there were many things that we did have. A television for example, and a nice row house. Early on, I learned that not everyone had that. And that it is important to keep an eye on people who are in different situations.”

What do you actually want to reach via the Windesheim Central participation council?

“That we become a university of applied science that is accessible to everyone. For example, we already decided together with the executive board that the ‘doorstroomnorm’ (transition norm) standard is replacing the binding study advice. Students get to decide for themselves whether they continue after their first year or not. You won’t have to stress about the decision of exclusion. That pressure on students, together with the loan system and the situation at the housing market… that too is survival. The school should pay attention to how students feel.”

In society you currently see much polarization and mistrust in the government. What do you think about that?

“I don’t think it’s strange that people mistrust the government. As PvdA, we are also to blame for this. We have introduced the present student loan system. Bluntly said, the government screwed people over, so for us as a party is this a real opportunity. We need to go back to a government that’s there for people, instead of against them. At the same time I know; that’s a long-term plan. We are not going to be able to resolve this in four years.”

And in five years? Were you finally able to get a house?

Hopefully I’ll be a physics teacher with a stable income. And indeed, I hope to have a house by then. A flat apartment is enough; I have already adjusted the expectation of a row house. Still, these things are not a given for a 29 year old. I know I have to fight for it. In politics, but also in my own life. As a matter of fact, I am in the middle of my own political story.”