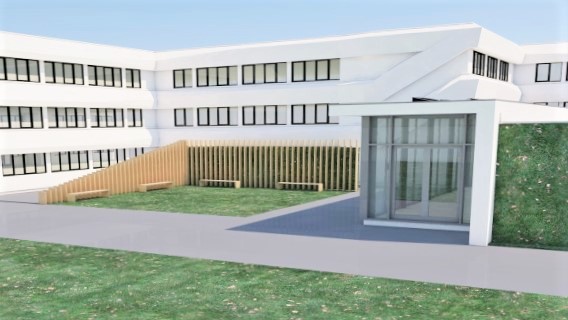 The main building gets a new green entrance

The construction of the new entrance building at the back of the C building has started. There will be a beautiful glass entrance hall and a park with benches next to it, which will give the renovated building a green appearance.

In the last couple of weeks, the sidewalk in front of the revolving door has been removed and the foundation for the new entrance building has been laid (see photo).

In a few months, visitors will no longer enter through the revolving door, but through the glass hall that is being built in front of it. The entrance leads to the central canteen of the C building.

Previously, the main entrance of B and C was not very noticeable nor very beautiful, especially because there was a wooden shed next to the entrance for the canteen bins. That shed has now been demolished and a green park with benches will be built on that spot.

“The entrance will soon be more beautiful and more recognizable”, says Fabio Ottenbros of the housing department. “On the side of the park, the hall will have a large glass wall that serves as a transition between indoor and outdoor. The building also helps to prevent draughts in the canteen.”

To increase the indoor-outdoor effect, the entrance hall will have a moss wall on the side of the Education in Primary Schools wing. “That ties in nicely with the green facades that are being realized at the rear of building B.”

The new entrance hall can probably be put to use at the beginning of April, the park next to it will be done next summer.

Facelift B and C

The construction of the entrance hall is part of a facelift of buildings B and C, which started last summer and will continue until the end of 2021. In addition, the 35-year-old buildings will have new facades, glazing and roofs with better insulation and a climate system will be installed.

During the renovation, the vacant building D will be used for temporary classrooms and offices for the employees and lecturers from the B and C buildings.

In the meantime, the renovation work on building B is progressing considerably. “We started two months later than we originally planned because the engineering took more time than expected. As a result, the return of the users of B will not take place in April but during the summer,” says Ottenbros.

The renovation of building C will be completed in autumn 2021. Ottenbros: “The completion is now scheduled for the end of December. During the second semester, education can start in the renovated C building. The advantage of this planning is that it fits well with the planned education and we do not have to move halfway through a period.”

You can read more about the renovation plans for buildings B and C in: New face for old main buildings.