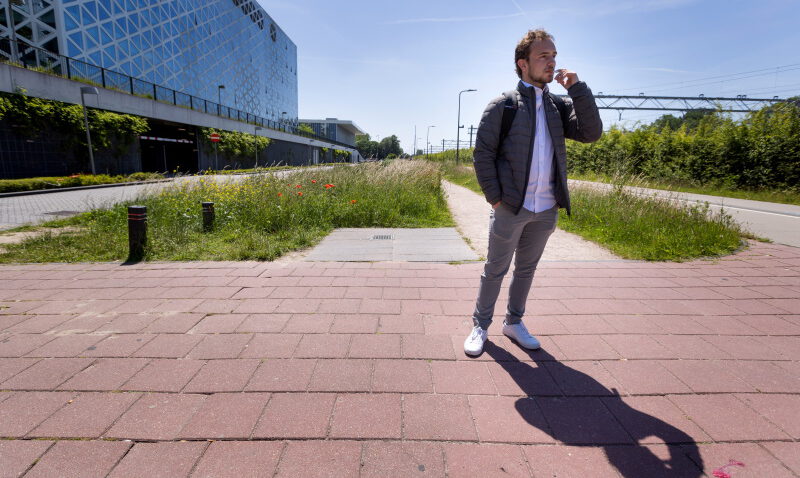 ‘Does our duty of care stop at the campus border?’

Smoking has been banned on campus for two years now. Smokers must go to areas outside the Windesheim territory. But not everyone does. Meanwhile, the annoyance about the disposal of cigarette butts in nature grows.

Can you take action against smokers who throw their cigarette butts into the greenery or into the water? Can you say something about it if groups of smokers block the way, if you have to pass by bike or on foot? What do you do about people who stubbornly continue to smoke on campus, even though they know they’re not allowed to?

It started with a simple question from employee Sjiera on Windesheim’s online platform Sharenet Yammer: “Windesheim is a smoke-free campus. Beautiful! But now all cigarette butts are on municipal land, or in the ditch. Does our duty of care stop at the campus border?” After this post, a heated discussion erupted, where a lot of piled-up annoyance from non-smokers surfaced. It seems to be an expression of the changing view on cigarette use, with less and less acceptance for smokers.

Ferna is annoyed by the habit in the Netherlands to just throw your cigarette butt wherever. “It’s really crazy when you think about it. If you want to smoke and have waste, isn’t it logical to think where you leave your cigarette butt?”

Alice lives near Windesheim, on the other side of the ditch in front of the campus. “Every day I hear and see the smokers gathering from my office on municipal ground. In my opinion a Windesheim unworthy case of throwing rubbish over the fence. Too hypocritical for words, really…”

Nienke thinks that smokers don’t think much about the fact that throwing cigarette butts in nature is bad for the environment. “Cigarette filters take decades to decompose after being thrown away.”

Nella adds: “In my opinion, the fact that 1 filter pollutes 8 liters of groundwater is reason enough to take measures.”

Most smokers on Windesheim neatly go outside to light their cigarette. But often they do not continue to the smoking zone, they stop near the entrance, where they cause nuisance and annoyance to non-smokers: the reception receives daily complaints about groups of smokers and a smoke smell at the main entrances.

Especially in rainy weather, smokers gather under the roof of the main entrance or at the entrances of the other buildings, the bicycle sheds and the parking garage. In fact, that has been prohibited since 2016. Back then, the smokers were already banned to the zone outside the white lines that were painted on the ground a few meters around the entrances.

In 2020, the government announced a complete ban to all educational institutions. For Windesheim, this means a ban on the entire outside area and around all buildings, including the streets, sidewalks and squares that lie on its own property.

In 2020, a few smoking zones were designated on the Zwolle campus on the public property of the municipality, right next to the campus site. At four locations on the front and back sides, tiled areas of a few square meters were created, usually next to a public sidewalk or bike lane, with an ashtray tile in the middle where the smokers can deposit their butts.

Windesheim has the smoking zones swept daily. But if you take a good look around, you will actually see plenty of butts laying around everywhere in the outside area.

This spring, the campus was fully occupied again for the first time since the corona pandemic. That is why the question arises as to whether the four designated smoking zones are sufficient. And the question is whether people in those locations – as smokers among themselves – might be getting too nonchalant about shooting butts?

Ian thinks that people who throw their cigarettes on the street in front of the campus also do so elsewhere. “The problem is habit.”

Ronald: “It’s about cleaning up behind you; your behavior. We can speak up to each other about this. And if there is just no trash can somewhere, that is not a license to throw butts on the street.”

Smokers who stubbornly remain on campus also have to pay for it. Ronald: “Yesterday I again addressed three to four students who were smoking right next to the ‘non-smoking’ flag. That is simply not allowed on campus.”

Arnold is not happy about this: “Smokers are excluded and sent away. If you stand ten centimeters behind the prohibition sign, security will yell at you.” The smokers feel like they have been put in a tight spot by the reduced tolerance.

Michiel: “It is clear that society has started to take a different approach to smoking, we as smokers have to adapt to that. I dislike being put in a box as a stinking polluter. Let’s start by saying that every person pollutes in one way or another.”

If smokers do light their cigarette neatly in the designated places, they regularly stand in the way of passing cyclists and pedestrians. When it is busy in the smoking zones, they automatically end up on the path, sometimes they look for a place closer to a main entrance out of convenience.

Ton can no longer get to campus on his bike without having to ride through smokers. “Sometimes it is so full that you have to go through the grass to get past it!”

Stijntje: “In the driveway to the bicycle shed under building X, everyone is smoking, so you always have to go through all that smoke.”

Is the nuisance caused by smokers in Windesheim worse than elsewhere? Caretaker Bart van Rooijen, who himself has stopped smoking since eight months: “No, it’s not that bad. Fortunately, at Windesheim we hardly have people who go too far. If you talk to them about it, they will listen. Sometimes they act very surprised, as if they do not know that it is not allowed on the school’s property. Or they quickly walk away when they see you coming.”

When it rains, maintenance is more difficult for the caretakers. Then they are happy if the smokers don’t stand close to the main entrance or the parking garage.

Van Rooijen sees many smokers who use the waste bins on the schoolgrounds to throw away their cigarette butts when they come back from the smoking zone. “Actually, they should not be used for that, but it does help against cigarette butts on the street.”

Does he now look at smoking differently? “Yes, of course. I also used to think that there should be a bus shelter for smokers. Now I’m just glad I stopped.”

The Zwolle Windesheim campus is located in the middle of the nature areas and near the IJsseloever.
Field flowers and orchids grow alongside the drainage channels. Ducks breed in the reeds and amphibians and large carp swim in the water. Two of the four smoking zones are located directly next to one of those ditches.

The smoking zone behind building E is located right next to an idyllic bridge over the ditch. This turns out to be a very inviting place for smokers to dispose of their butts. But what does it mean for valuable flora and fauna if a bucket full of cigarette butts is thrown into the ditch every day?

Ömür likes to stand on this bridge: “The waste tile is hardly used here, because most smokers stand on or near the bridge. I don’t throw my butt in the water. But it would be good if a large waste bin was placed here that is clearly visible.”

Windesheim wants to improve the smoking zones around the campus. The zones were constructed two years ago along the campus grounds in consultation with the municipality, but they do not seem to live up to expectations.

A Working Group of the Real Estate & Facilities Department will investigate what can be improved. “We want to make adjustments this summer holiday,” says Facility Advisor Mark van Vilsteren.
The Working Group will firstly investigate whether the ashtray tiles in the smoking zones are adequate. “Perhaps, for example, extra ashtrays could be put onto the posts with the smoking zone signs.”

Finally, enforcement is examined together with the caretakers. “The best thing would of course be if the majority of smokers set a good example and address other smokers if they don’t follow the rules.”