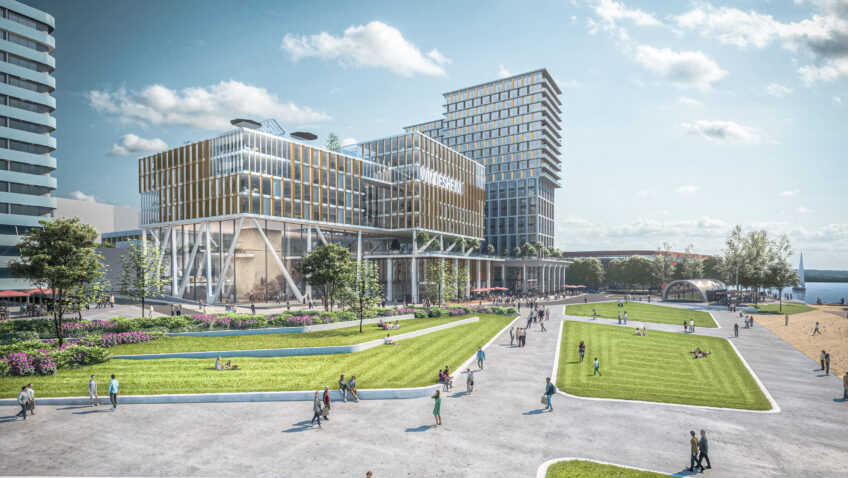 The final site for the new Almere main building

It has finally been decided: Windesheim is allowed to build a new educational building in the heart of Almere, between the Flevo hospital and the ‘Esplanade’.

The city council debated for over a year about the best location for Windesheim’s new main building. Initially, the idea was to build a new building on the site of the ‘De Voetnoot’ building on the city hall square.

Kees Stolwijk, director of Windesheim Flevoland, is pleased that the mega construction project can finally start. “Both locations had their own advantages. “De Voetnoot is a five-minute walk from the NS station and opposite to the Windesheim locations the New Library and Het Circus.

But the Hospital Garage is also located in the heart of the city centre. The walking distance to the station and the other locations is manageable. This location on the Esplanade is also very attractive for our students, colleagues and regional partners. It is a lively location with events such as the Triathlon and the Liberation Festival (to celebrate the liberation after world war 2) right at our future front door.”

Windesheim has grown much faster than expected in Almere. Two years ago, 4000 students were enrolled for the first time. In 2021 Windesheim Flevoland will already have around 5000 students.

Since the current main building, the ‘Landdrost’, became too small, extra space has been rented in the ‘New Library’, ‘Het Circus’ and ‘Baken Stad college’. The latter location will no longer be necessary from the next academic year, when more space becomes available in ‘Het Circus’.

After 2025, Windesheim wants to terminate the lease with the ‘Landdrost’ and then exchange the tower for its own new main building. Windesheim wants to be able to accommodate at least 6000 students and 400 employees in the new building on approximately 20,000 m2 of surface (of which 2000 m2 for facilities). The first plans referred to a ten-storey building.

Windesheim would like to see student housing and facilities for students next to the new educational building. In the first plans, worked out for the location of the ‘Voetnoot’, housing for 1000 to 1500 students was envisaged. “In addition to the ‘Voetnoot’, there was a lot of space for student housing combined with shops, restaurants and cultural facilities on the festival square. But the building plot next to the ‘Hospital Garage’ is smaller. As a result, the student flats will have to be built more vertically, Stolwijk expects.

Windesheim is not a party to the construction of the student housing, by the way. “It has been discussed in the city council that a substantial part of those homes will be rented out to students from Almere.”

It is not yet known exactly what the new Windesheim building will look like. There is no design yet, but the municipality has had example elaborations made in the form of artist impressions.
It shows a wide educational building and a high student flat. There you can also see how beautifully the square on the south side connects to the ‘Esplanade’ on the water.

The current main building ‘De Landdrost’ is actually an office building and could therefore never be perfectly designed as an educational building. Stolwijk: “The ‘Landdrost’ is located on a narrow plot and rises in height, but an ideal educational building has a broader base. Then, for example, on the ground floor, you have enough space for all important functions and facilities.”

The new main building will probably have a ‘plinth’ at street level with functions that are in line with the city centre. Stolwijk: “We can arrange the new building completely according to our wishes and set it up sufficiently spacious so that it can last for decades and can keep up with current developments in education and the region.”

Due to the delay in the selection process for the location, it is not entirely certain whether the new building can be ready in 2025. Stolwijk: “We are going to do everything we can to speed this up. We hope that construction can start at the end of 2023.”

This week the Almere aldermen and the executive council of Windesheim signed the letter of intent. “At the end of this year, the plan of requirements will be ready and the selection of the architect will be completed.”