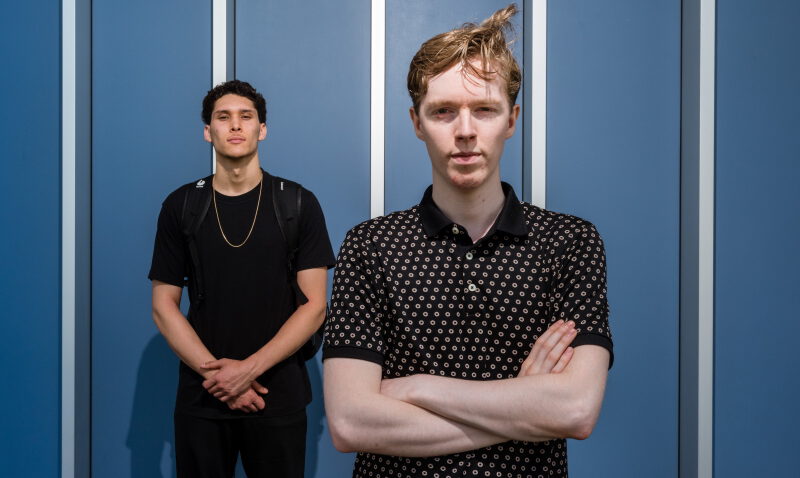 Stocks: ‘A big drop is just part of it’

These days it is pretty easy to get into stocks and there are many hot companies like Tesla, Disney and NIO. On top of that are the cryptocurrencies, like Bitcoin and Dogecoin, with courses going in every direction. Two students talk about their portfolios.

Students Alexander Bos and Nick van Raaij (right on the photo) see an increasing number of people investing in stocks. “Especially since COVID”, says Nick. “Before this, you had a nightlife and spent money on beer, event tickets or travelling. Also, the inflation is higher than the savings interest. Money is just idling in your bank account.”

“People in their forties or fifties might be used to putting all their savings on a bank account and think: ‘Stocks? Difficult, too much effort!’ But the younger generation adapts quicker and get into investing way easier. They see that you only have to create an account via an app or website and that you can start with a very small sum.”

Nick: “I only invest in cryptos that I think have a future. It’s about the long term for me, I expect that all my stocks and cryptocurrencies are worth way more in ten years. That way you won’t panic when the value suddenly drops by twenty per cent.”

Take NIO stocks, a Chinese electric car producer. “I invested in them early, at two dollars. At a certain point the value increased to sixty dollars, and now thirty-seven. That’s a company I just feel has a good chance to become as big as Tesla, so I’m holding on to those stocks.”

Second-year Finance & Control student Alexander Bos also owns cryptocurrencies. “Mostly Bitcoin and Ethereum, the second-largest crypto, and a few smaller currencies.” Though Bitcoin is in the negatives because of a major drop in May when Tesla CEO Elon Musk announced that Teslas can’t be bought with Bitcoin. “But that is when I bought a lot more. I like to take advantage of such a drop.”

When it comes to stocks Alexander plays it a lot safer. “I watch things like turnover growth and dividend distribution closely. I focus on companies who work on artificial intelligence, but also on semiconductors, which is totally relevant now because of the shortage of computer chips.”

Alexander started with a small investment. “I started in 2020 with one stock in Microsoft, at this point, there are about five thousand euros worth in my portfolio. I only invest the money I don’t need right now. When I look at my stocks, there are three or four that dropped in market value by about forty per cent since I bought them. That is a shame, but I can take it and I trust their value will go up again. It’s about the long term. Moreover, I also have an ordinary savings account at a bank I never touch.”

Nick started investing in stocks about three years ago. “I had little fixed expenses and with the money I saved every month, about a hundred to two hundred euros, I bought shares. When NIO exploded I suddenly had a lot more money in my portfolio I could do something with. Now I’m at fifteen- to sixteen thousand euros, spread over many different stocks and mutual funds.”

Nick has his concerns about the current market, he stopped investing a fixed amount of money every month. “It feels like a bubble at the moment. At the start of the pandemic, there was a major drop, but afterwards, in the spring and summer of 2020, everything rose quickly. Even a novice could’ve made a lot of money. But that parabolic growth can’t last forever, it will stagnate and reach its limit.”

Nick thinks that because many people had more money they started investing due to covid. Slowly they’re pulling that from the market because they are able to go to restaurants again and want to go on holidays. “The tech industry, that I invested in out of personal interest, recently saw a big drop. You see the same occurring with cryptos. People who don’t really know what they’re doing panic and instantly sell when they see a drop. That causes the market value to drop even further.”

Nick: “The best way to shield yourself against major drops in shares? Don’t invest in cryptocurrencies or other riskier products. If you are prepared to take risks, you’ll have to live with the fact that a value can drop by fifty or even seventy per cent.”

Nick and Alexander are members of Carpe Divitias, which is aimed at students from Zwolle. This investment club organises talks with speakers from the financial world and they have their own equity funds. See: www.carpedivitias.nl