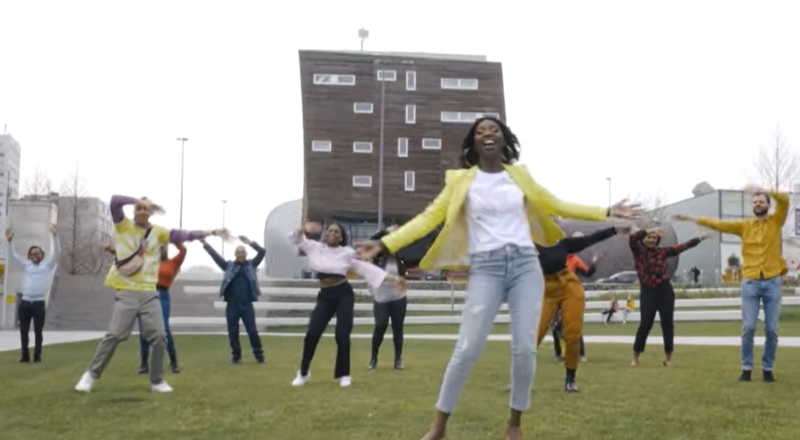 A virtual hug for more cheerfulness

‘Corona has rekindled my passion for music’

Singing has always played an important role in the life of Urcy Miranda. This spring, the Law teacher released her first single: “Virtual Hug”, for all the Windesheimers who could use some cheerfulness.

“Back in the day at our house, there were all sorts of music styles being blasted through the speakers. My father was a dedicated LP collector. From reggae, jazz and Motown to country and Michael Jackson. As a little girl, I used to look in the mirror with a hairbrush in my hand and I would pretend to be Whitney Houston giving a concert. Next to that, my brothers and sisters all have musical talents. At home, we were always singing and dancing. I am the youngest of five children, so we were sometimes called The Miranda 5.”

As early as primary school, Urcy started to take singing lessons. She continued this until the end of secondary school and performed here and there. Still, she took a different path within secondary education. She studied Law at the Vrije Universiteit. “Singing lessons were great, but the exercises I found a bit boring. I did not have the perseverance to put that much time into it. Just like with professional football players, you have to, as a singer, go pretty far if you want to make it, because talent on its own is not enough. Law is something that also totally fits me. But once you have a little fire burning, it will never totally go out.”

In 2010, she stepped out of her job as a company lawyer and joined Holland’s Got Talent. She made it until the semi-finals. In 2017, she and several other artists organised a gospel concert in the theatre in Almere. But after that, singing became less of a priority. But COVID changed that.

“In September 2019, I ended up working for Windesheim and only half a year later, corona arrived. Well, that is quite the challenge as a teacher who just started. During the first lockdown I fell ill with corona and the entire family had to quarantine; I luckily only suffered from mild symptoms and could quickly recover at home. But then I did realise what a horrible situation we are all finding ourselves in. My SLB-talks of the past year were mostly focused on motivating students. Hang in there!”

Together at the piano

With that thought in mind, Urcy wanted to release her song Virtual Hug, to cheer up students and colleagues. Although, releasing a song was not the initial idea. “Over dinner, I spontaneously started humming and my daughter got all excited saying: “Sing that again, mom!” So I did that again and I thought: “It does sound pretty nice.” We immediately sat down at the piano together and I started writing. I am now in a mood where I find it really fun to try out new things and discover new things about myself. Starting to teach was also something I thought was very exciting.”

“Everything I do, I do with passion and conviction. Virtual Hug is normally not really my genre, but it is something that does really come from me.”

The video clip for Virtual Hug was filmed at Windesheim Almere this spring, because Urcy wanted to get across the online situation. From April onwards, the clip was online and it now has over six thousand views. She receives a lot of reactions through email and her song has already been played by a few radio stations. “Because of the current situation that we are in, I still cannot perform but since releasing my song, I have been giving a few interviews a week, which I think is great! I sing and write more at home and I want to share my music through my YouTube and Instagram accounts. Corona has rekindled my passion for music.”