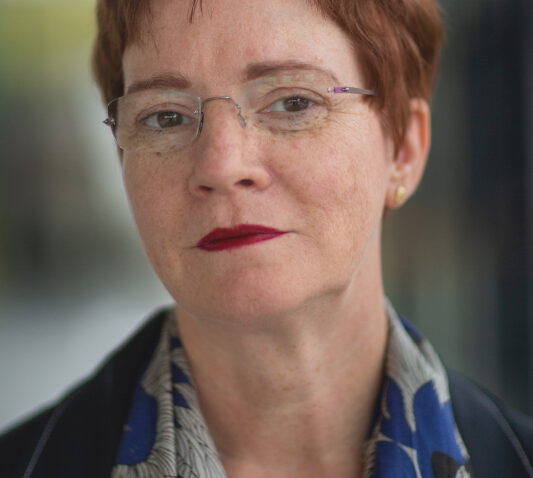 ‘We need to find ways to persevere’

While the majority of society is going to back to normal in some manner, the universities of applied sciences are up for a big challenge. Executive Board member Inge Grimm hopes to maintain the ‘drive’ of the past months.

From physical contact to online. From a busy, social campus to an ‘as empty as possible’ campus. It required massive, almost bizarre measures. Executive Board member Inge Grimm was impressed by the flexibility of colleagues and students alike. But there are limits. “Something like this eats up a lot of energy, the energy that should go towards the ‘normal’ work and education.”

The first week everything was clear; now that more things are allowed, everything seems to have become a grey area. Is there a guiding role here for the Board?
I think our role in the coming months will be to establish frameworks. Within those frameworks, the domains and study programmes can make their own decisions. In many buildings, there will be one-way traffic and classrooms will be remodelled so that it can only be used for eight or nine students at a time. The domains have been asked to make schedules based on how many students of their domain are allowed to be present on the campus at the same time. There will be special attention paid to the first years. However, every student, from each year, should be on campus at least once a week.

And those students should not loiter…
It is everyone’s responsibility to not arrive earlier than required, and not to stay longer than required. Teachers and other employees can address students about this, but it’s not going to be a task for employees to check that, to ask students: what are you doing here? There will not be a Windesheim ‘corona police.’

It’s all great, the dedication, the flexibility, but aren’t you afraid that if this will go on for a while longer, that it will affect the quality of education?
We all hope that this will be over soon and that we can go back to meet each other more often. Sadly, I can’t look into the crystal ball. Will there be a second wave… will there be a vaccine for everyone… In short, uncertainty. Together we have to find ways to move forward. For now, we are looking for a new balance between physical contact, the meeting up and interaction and a part will be online. The coming period will stay incredibly busy for many but the commitment is huge, just as the drive to deliver wonderful, quality education.

The crisis is not only difficult for education; don’t forget research. That also has to suffer a lot. Mostly because of the decline of economic activity in the area. No one knows how quickly that will recover and the expectation is that we will also have another economic recession. That is bad news for research as well and will also have consequences for the possibility to go on internships. In a nutshell, the situation for that matter is dire.

Nevertheless, there was already being worked on digitalising and less campus…
We had already drafted a multiple-year campus plan and within that framework, we were looking at the number of square meters with a critical eye. Then there are people talking about ‘everything will be digital and the need for a campus will disappear’, but I don’t believe that. The need for physical contact remains a crucial part of our educational vision. A second example, we were thinking of different ways of taking tests as part of educational innovation. Initially, the conversation went into the direction of an and-and solution, so offering both physical and digital tests – something I’ve always said about: but watch out, don’t test doubly, something like that increases the workload and won’t lead to a rise of quality. I think that under the pressure of the circumstances we should look at the amount of and the kind of test more vigorously and that the emphasis partly shifts toward different kinds of digital tests. That I would find a good development, again, looking at the workload.’

Can you already say something about the financial consequences for Windesheim?
A recent calculation has shown that at this moment we have 1.4 million more costs than estimated. That is a combination of more expenses and less income. We had an estimation with a million in the plus so I don’t see a reason to think about budget cuts. This is an emergency, that’s just it. We have filed a claim to the ministry, like many other universities and universities of applied sciences, but that will point out the financial reserves higher education in general, Windesheim is not excluded in this.

And if an economic crisis does happen?
Right now I’m not worried about our finances for this and next year, but I can’t say the same about 2022 and on. If we do have entered a recession, in addition to a new cabinet after the elections in March, the battle for money will start for real.

Let’s return to the measures starting in September. Everywhere in the country, you see the discipline of people disappear. The people want to go back to ‘normal’. Isn’t higher education receiving unnecessary harsh treatment?
In my surroundings, I notice that friends and family who work at companies don’t have to face our strict rules. That can be cause for fierce discussions. On the other hand, I count my blessings that we, despite the enormous pressure – no doubt about that – didn’t have to lay off any colleagues and that our organisation won’t be in trouble. I do think that all the restrictions are extremely unpleasant for the students…

Any closing statements?
Everyone stay healthy and we will do our best for the students and co-workers!