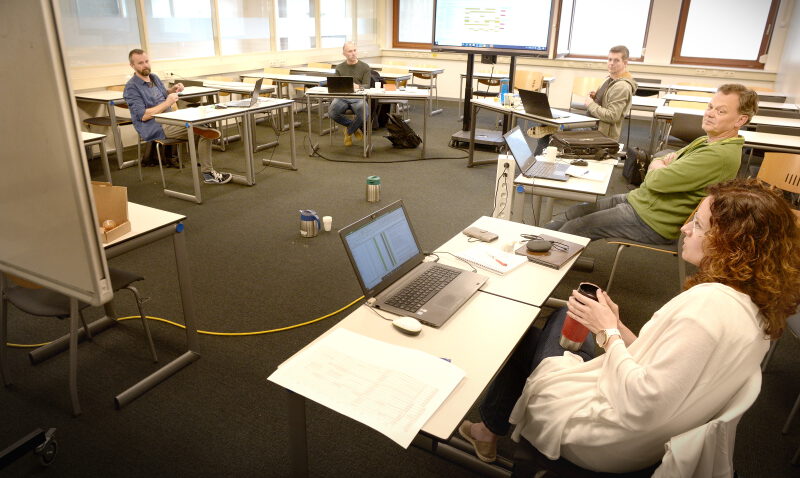 Hardly any lessons in the evening

Study programs schedule evening hours only as a fallback option

The study programs faced a difficult dilemma when scheduling education starting september: at the ‘1,5 meter campus’ it ís possible to teach up to half of the classes on campus, but only if students are also taught in the evenings. And that is something the study programs do not want.

Windesheim takes into account the current distance rules will continue as of July first during the first semester. For the offices and teaching rooms, this means that the furniture will be widely spaced, reducing the total capacity on campus to just 15 to 20 per cent of the normal number of people. General classrooms for 30 students go back to a maximum of 8 students and a teacher.

With that space limitation as a given, an attempt is made to estimate what would be the maximum possible in terms of physical education on such a one-and-a-half-meter campus. But that remains a combination of estimation and predicting the future. In a normal situation, the schedules are not jam-packed and it is only crowded on certain days and hours, for example on Fridays and late afternoon hours it is normally very quiet. If you take an average of the normal room occupancy between 8.30 am and 6.30 pm, the rooms are only filled for 65 per cent.

What if the courses now decided to schedule classes during all those quiet hours? And maybe even in the evenings? It would then be possible to continue to give half of the lessons physically on campus, despite the small groups per room. A comparable calculation was made for employee offices. Teachers and staff would still be able to physically be on campus for forty per cent of the normal hours, so about two days a week instead of five days a week. This can be achieved by scheduling well and spreading out the lessons.

But is it desirable to have students and lecturers at the campus at night, in a situation where everything is already different from normal? Or would you prefer to schedule fewer physical meetings and provide more online education? The Executive Board passed this question on to the study programs last month when they first started thinking about the September timetable. Creative education was desirable. Luckily, teachers have gained a lot of experience with this in recent months.

What do the schedules of the first semester – just before the summer holidays – look like now? Organizing half of the lessons on campus does not seem to be successful. Most of the education will have to be done online after September first. Inge Grimm of the Executive Board: “The final schedules will only be done halfway through

‘’It remains a combination of estimation and predicting the future.’’

August, but we can already conclude that the Study programs do not prefer to schedule classes in the evenings and would rather do more online. They seem to mainly use the evening hours as a fallback option when the morning and afternoon hours are fully booked”.

Living in grids and blocks

What will and will not be allowed on campus? That is tightly arranged.

The Executive Board has drawn up strict guidelines in the document “Frameworks for the use of buildings.” The main idea behind this is to spread people as well as possible on and on the way to campus so that there is enough space to keep a meter and a half distance. After the summer, a maximum of four thousand students per day may be present on campus in Zwolle and a maximum of nine hundred on campus in Almere. Normally the numbers are doubled.

On-campus, scheduling takes place in four consecutive grids (two grids in Almere) of ten grid hours: the first grid starts at 8.30 am and the subsequent grid starts half an hour later. The last lesson ends at 10 pm and Saturdays are kept free for unforeseen situations. Students will soon be at least one full morning or afternoon on campus. After a morning or afternoon block of four hours, there is always an hour break to make it possible for a group of students to leave, the classes to be cleaned and for a new group to arrive. If possible, it is not the students who change rooms, but the teacher.

Students will be asked to leave soon after their lessons and hardly any study spaces are open. The media centre is open but not to study there. Coffee machines are available, but the canteens are likely to operate through a takeout concept, so people do not sit down. “Closer to you, that is the slogan of Windesheim. That is difficult, but we still have to take the situation into account in the coming period.” says the Executive Board.