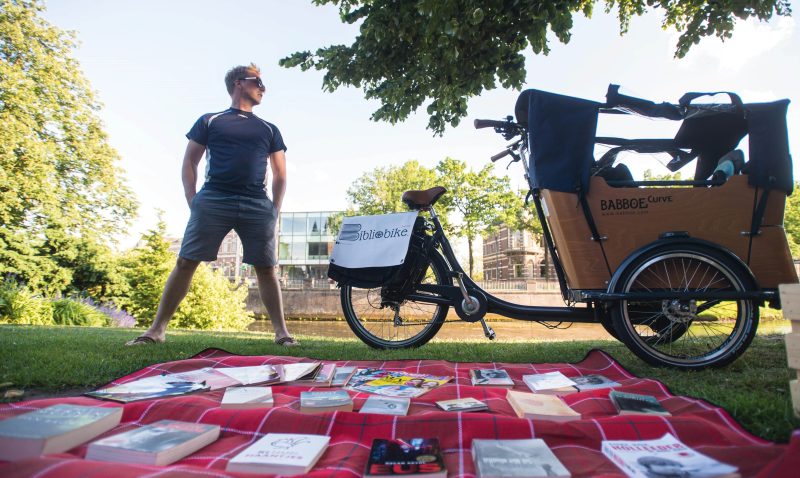 “Teun is taking his book cargo bike to parks”

Windesheim student Teun Toornstra wants to get people reading by visiting parks in Zwolle with his so-called Bibliobike. “Anyone who wants to, can borrow a book.”

Snack-reading is what he named it. This refers to a book that you can finish quickly. Comics, children’s books, magazines and books with columns. It’s perfect for when you’re relaxing in the park for an hour. “People who are by themselves or mothers with children will enjoy this. Groups of students that are hanging out with a six pack of beer on them might not be that eager to grab a book but you never know. They could read funny extracts to each other or do a quiz from a magazine together. You can do that with these books.

Relaxed browsing.
Teun (32) transports the snack books through the parks of Zwolle with his cargo bike, which he named the Bibliobike. He does this every Wednesday afternoon, in a different park every week. He displays the books on a blanket. “Anyone who wants to can borrow a book. I got the idea when I was on holiday in Slovenia. We were in a park and there was a small garden house with books in it. People were browsing through the books and reading them in the park. I thought it looked very relaxing. I thought, we should have this in Zwolle.”

Coming up with ideas.
Since cargo bikes are expensive, Teun made a visit to the local culture foundation. They provided him with the funds to purchase the bike. “They were excited almost instantly, especially since I also came up with a plan to help illiterate people: people who can’t read and write. We are still thinking on how we want to reach those people with the Bibliobike.”

This urge to help people is clearly visible in Teun’s work. When he’s not on his cargo bike, Teun is a social worker and does a part-time study at Windesheim to become a social worker within the health care branch. “I find it very important that people are enjoying themselves, that they are entertained. And I enjoy coming up with projects that colour our streets. I am a creative thinker, I always have ideas.”

A tall flag.
Halfway through May, Teun went out and about with his book cargo bike for the first time. The location of the day was the Stadspark, right near the Sassenpoort. “Everyone had to get used to it for a bit. People were eyeing me in a questioning way and asked if I was selling books or if they were free of charge. Those were mostly people passing through the park. It takes skill to approach people who have been in the park a little longer. The first time, not a lot of books were lent out but that will change. I want to put a tall flag that reads “borrow books for free” on the cargo bike. That way, people will see me from a long way off.”

An entire shed full of books.
All the books Teun got for the project were free. “It really surprises me that if you don’t say no, you’ll end up with a shed full of books. People apparently want to get rid of them or they want to support the project. I receive books from charity shops but also from friends and acquaintances. It’s fun. Apparently, the Bibliobike is a great idea!”

Tourist information on wheels.
The fact that Teun doesn’t sit still also becomes apparent when we look at his future plans for his book cargo bike. “In the summer, there are bound to be a lot of tourists in the parks. That is why I’ll be collecting books about Zwolle. That way, they can figure out what they still want to see of the city. It is a sort of tourist information in the park. For the time being, I announce where the Bibliobike can be found on Facebook-Events, but a website might be handy too.

“In the summer, I’ll lend out books about Zwolle to tourists.”

And, furthermore, there are plans for a second cargo bike. It would be really cool if we’d end up with multiple people lending out books, in multiple parks at once.”