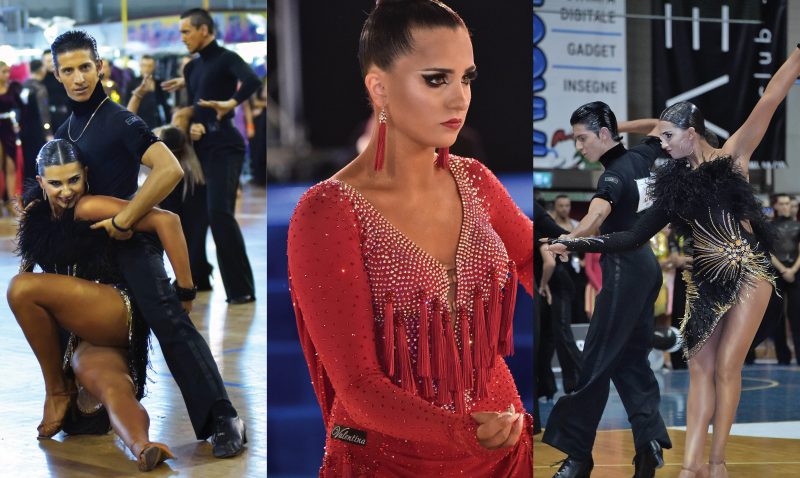 She combines a study on Windesheim with her Latin dancing career in Bologna, Italy. As if that isn’t enough, Kristina Dejnega (21) also flies to Cyprus to see her dancing partner there. “You are whole when you are together.”

The realization for Kristina came when a friend, who also dances, moved to Italy. “There aren’t enough good trainers in the Netherlands. That is a shame when you want to dance on a higher level. When my friend went to a higher level, my parents told me: If you want to do this too, you can make that move. We will support you.” At the time I was already studying, but I wanted to get more out of dancing. I then also realized that I had the opportunity to chase my dreams: become a big Latin dancer.

This causes her life to be pretty busy for the past year. Because in the meantime Kristina still studies Marketing at Windesheim Flevoland. And then there is Cyprus. “The Latin dancing world is pretty small and finding a partner is often difficult. My trainer found a partner for me in Cyprus: Andreas.”

“I would love to become a world champion”

“We often travel towards each other, which is pretty exhausting, because there are no direct flights. But I like to do it. Thanks to Andreas I am improving myself, which has been different in the past. I used to dance with my previous partner for five years. I was also in a relationship with him, which made it more difficult. When I moved to Bologna, he didn’t have that opportunity. In the end that relationship ended because of the long distance.”

Seven hours a day
Even though Kristina and her partner aren’t always together, she is also able to practice on her own. “I have dancing class every Monday and Wednesday for one and a half hour. Next to that I do a physical preparation for two hours: for example, I train my speed, cardio or balance. I also train on my own for three hours. In the afternoon I have lunch and I rest a little, but all in all I train seven hours a day. I am only free on Sundays. Training alone makes me feel lonely sometimes: working with a partner is much more motivating. However, Andreas cannot be in Italy constantly and I am not able to go to Cyprus all the time because our trainers are not there.”

The many hours of training -alone or together- is paying off, because in the end of May Kristina and Andreas will participate in the European championship for Latin dancing. “On Cyprus we became third in our country, so we want to see how we would do at the European Championships.  I would love to become a world champion, but a lot is necessary to be able to reach that level though.” The trainers are not too blame for anything according to Kristina. ‘Sara and Vincenzo were Italian champions multiple times.”

“I miss my family the most”

“Sara is very focused on technique, while Vincenzo is more focused on the art of dancing. I have never seen anyone who can turn so quickly as Sara or is as charismatic as Vincenzo.”

Physical and close
To become better and better, Kristina and her partner need to have the routine down. “That’s what I like about Latin dancing. The man leads the woman, so when the man decides to change direction, the woman has to feel that. You have to be whole together. Couples who have been dancing together for a long time, dance better than couples who have just been formed.” Yet this bond between Kristina and Andreas will not lead them into having a relationship.  “I now know that it is better to separate dancing and having a relationship. It is very tempting to mix those things up, because dancing is so physically close. But it also brings unnecessary drama. If the training didn’t went well, it is more difficult to be nice to each other afterwards. When you’re in a fight at home, training isn’t possible either. Luckily Andreas isn’t my type, that makes it easier.”

Call every day
Next to dancing and studying there is also something called a social life. Kristina meets with other Latin dancers between sessions. “I learn a lot from the people who are living the same life here. Those people are dancers from all over the world and we have a lot of contact. I live together in an apartment with my friend who is also a dancer. I only see my friends in the Netherlands when I am at school to take a test. They understand that I am busy. Here in Italy I miss my family the most. I call them every day.”