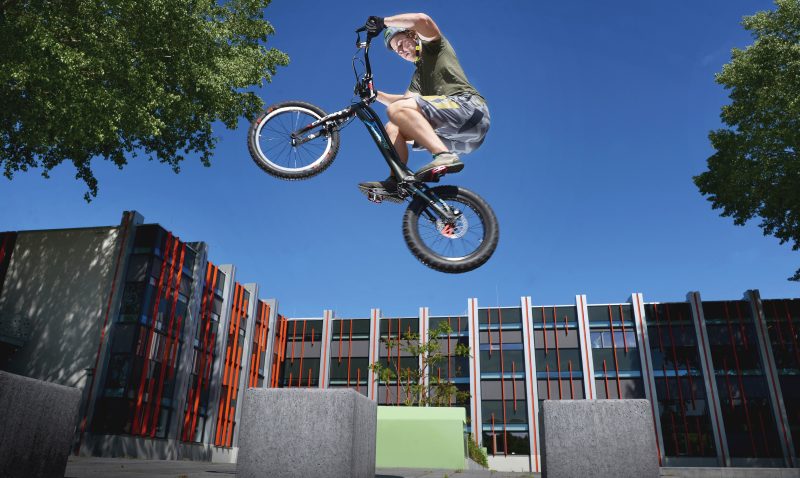 ‘Of course you fall sometimes’

Student Teacher Education in Physical Education Dyan Evenhuis practices biketrial: overcoming a parkour of obstacles on a bike. “It seems like a physical sport, but you mostly have to be mentally strong.”

You balance on a bike and you need to get that bike across a huge concrete block. Feet aren’t allowed to touch the ground and you aren’t allowed to make speed either.
“As a biketrialer we cross a parkour of all kinds of obstacles on some sort of cross bike, like tree trunks, pallets, tubes, big stones or concrete blocks. We have to make small jumps on our bike to get across the obstacles. Very challenging!” Student Teacher Education in Physical Education Dyan Evenhuis is crazy about his sport, he can be found on the trial track almost every day.

Scrapes
Dyan (now 18) was about nine years old when he started biketrial. “It took about a year before I could do anything. Keeping balance is the first thing that you learn. You put your front wheel against a wall and try to stay seated on the saddle without touching the ground. When you can do that, you try keeping your balance while standing still in the same spot. Then you try to get across a small obstacle, while a trainer holds your steering wheel. That’s how you build it up. Of course you fall sometimes, especially when I just started out. If you miss a stone or don’t anticipate it properly, you’re launched. But I can tell when something is about to go wrong because of my experience, and still jump away.”

“If you miss a stone, you’re launched”

“Real accidents are rare. I know someone who hit his helmet on a stone during a fall, and he fell into a coma because of it, but that is an exception. I haven’t had anything but scrapes, myself.” Dyan’s motivation got a huge boost when he visited the World Cup in Antwerp when he was twelve. “When the competition was over, I went on the course to try it for a bit. Then suddenly the great Vincent Hermance came up to me, who became third, and gave me the cup that he had just won. I was allowed to have it, because he thought that I was talented and he wanted to motivate me to keep going. Really cool!”

Confidence
“Biketrial seems like a physical sport, but you mostly have to be very strong mentally. For example, in order to do a high jump, you really need to convince yourself that you can do it. During competitions, some competitors step off their bike halfway through because they have lost their confidence.”

In order to become better, Dyan has a personal coach who lives in Belgium. “The sport isn’t that big in The Netherlands. I go there once in a while and then he helps me to become better. I can now, for example, jump over objects up to 110 centimeters high and I want to learn to get 10 centimeters higher. My coach teaches me techniques on how to handle that and shows me videos. But it is also inside my head.”

“With biketrial you have to be strong mentally”

“I mostly have to say to myself: ‘Dyan, you can do this’ and then go. If I believe in myself, it works out.” Dyan practices at a trialbikeclub, of which several exist in The Netherlands. But when he has little time, he just goes into his back garden: “There I have built my own small trial course with a few tubes and blocks. It’s nice for when I want to train in-between sometimes.”

World champion
What about this sport attracts Dyan? “Biketrialers are very social. Before the competitions I talk to my opponents about how we approach certain sections and when my bike breaks, I can borrow pieces from everyone. Going to a competition weekend feels like a small vacation.” Dyan regularly attends competitions and has become Dutch Champion twice with the juniors. His final goal? “To become a world champion. I am currently 92nd on the world ranking list, I want to rise up 20 spots this year. If that works, I will try to rise 20 or 25 spots next year, and so forth.”

But becoming world champion isn’t even his biggest dream: “I hope to open a trial academy, a school to learn the sport. I teach two boys every Saturday at the moment. I can see them enjoy it and I really have a connection with them. Abroad such schools already exist, but in the Netherlands the sport is still too small and unknown. I hope that that is going to change.”