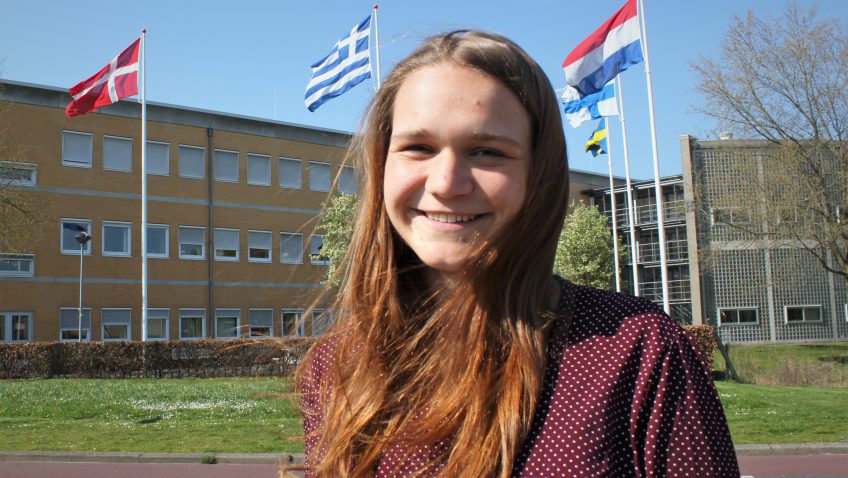 The European elections are often far away and of no concern to citizens. Last time only one out of six young adults voted. However, there are also Windesheim students who find Europe very important.

Marie: ‘In Brussel I got the EU fever’

Marie likes to motivate other students to vote. With a group of students from the honours college she organises events in the days before the elections.

Their campaign started last week with a European pub quiz in Sally O’Briens. In the weeks up to the elections (taking place in The Netherlands on the 23rd of May) they organise all kinds of gatherings and an exhibition on the campus, to promote the debate about the European elections. “We think voting is very important, because it’s your only chance to contribute to what the European politicians decide for us the next five years”, says Marie Endebrock, second years student Global project and change management. Together with Fiona Bauhofer and some twenty other Whc students they organise a campaign next to their study. The 21 year old German got the EU fever herself last year, when she was an intern at the German agriculture department in Brussel. “Before then Europe seemed too far off for me, but now I view it as an important part of my life as an European. There are so many European decisions that have great influence. For example: studying, traveling and telephone costs abroad.”

Marie finds the thought sympathetic that all European countries work together and promote mutual exchanges. In turn, she finds it saddening that the UK wants to leave. “Here you can see how important it is for the youth to vote. Mainly the elderly voted for Brexit, while the youth was underrepresented.” The most difficult matter according to Marie is how much power the European parliament has to have in the end. “It is important that the member states can preserve their own language, culture and authority. Centralisation needs to happen carefully, or else people will feel excluded and it’d be counterproductive.”

What is the most fun part of the campaign? “On the night before the elections, the 22nd of May, we’ll have a spectacular Election Party in student café Het Vliegende Paard. We ask the visitors of the theme party to wear something that resembles Europe. At midnight an official voting booth will open in the café, where you can vote until 1:30am.” (EM)

Climate change, a rightful shelter for refugees, making sure multinationals pay their taxes, closing the wage gap between men and women. All-important problems which the Netherlands can’t face on their own. And like that there are many more big challenges which we can only solve if we cooperate with the countries around us. That’s why I vote on the 23rd of May. For cooperation and progression.

For student and journalists the EU is of great importance. The EU acts as some sort of a zip-line between the different member states which for example assures that you can easily study abroad. Countries have to meet a lot of conditions to join the EU. A country needs to guarantee it’s a democracy in which equality, freedom and respect for humanity is pursued. As a journalist, freedom of press is of vital importance. I have the feeling that the cooperation enables journalists to do their work properly because there is peace and trust between the member states. For that I am grateful to the EU.

It may sound crazy, but I believe that the European Union should be less democratic. Europe as it is now exists out of endless instruments and bodies where people receive tide-over allowances, this could be much more efficient. The EU is definitely useful, but it needs a serious reformation. The whole Euro parliament can be thrown into the bin for all I care, there are not enough people who vote for it. The Council of Ministers already exists out of democratically elected government leaders of all member states. If the EU isn’t noticeable in our personal lives anymore, it is successful for me.

Milou: ‘Study wherever you want’

“I took part in an European study in which I and other European students researched statements made by politicians. At the moment I am preparing myself for a study trip to Denmark. There, fellow students and I are going to research the mental health of students: In Denmark this is as big of an issue as it is in the Netherlands. I find it important that people know what happens outside of the Netherlands because in Europe, we all have influence on each other. A direct solidarity with other European student it not something I feel, but it is nice that we have the freedom to follow classes in all of Europa, to study wherever we want and to travel freely.”