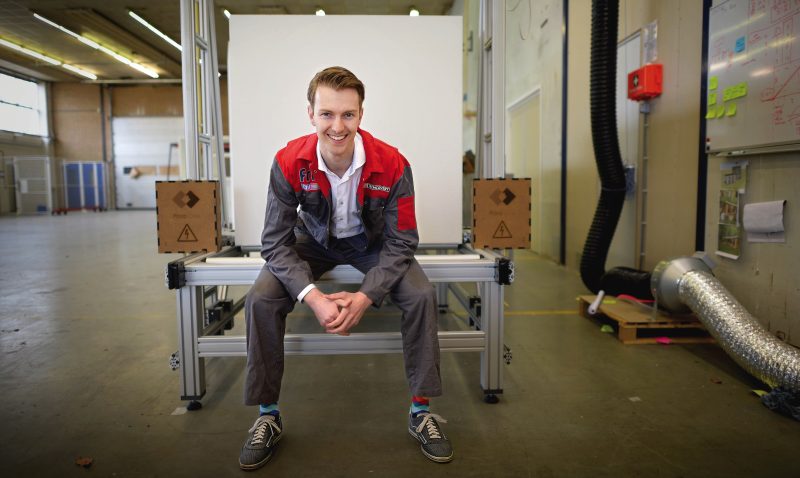 “Client becomes architect of his own sustainable house”﻿

Student Boy Rolloos wants people to take better care of the earth. That is why he is putting in his heart and soul in developing a new way of building houses: residences which are the state-of-the-art in the field of sustainability.

Compiling your own home from seperate elements: it is possible with the building concept developed by the student enterprise Forest Living. “The client becomes the architect”, says Boy Rolloos (26), fifth year student Small Business and Retail Management. “The client is able to select the number and the sizes of the rooms, if he wants a round or square façade and where the doors and windows need to be and how many of them needs to be placed. We only have to place the correct modules together. A house like that will be built in approximately twenty days. Subsequently a house like that is easily adjustable or expandable. It is the realization of a real live version of ‘Lego’ in the construction world.

Energy neutral
Boy has developed the concept himself, together with Architecture and Construction Engineering student Johan Fluit. The goal was to make the residences as sustainable and climate neutral as possible: “We are using plastic building elements which are 90% recyclable. When a house needs to be demolished, the elements are reduced back to raw materials and then are remade into new modules. Thanks to the elements the residences will be so extremely well isolated, that you can heat it using a simple blow-dryer when it freezes outside. During summers the inside temperature will remain constant. Which makes it possible to live almost energy neutral.”

The houses are filled with energy saving measures: “ We include a shower which reuses the water that one uses during a shower, during the actual shower moment. Only after it is filtered of course. So one only uses three liters of water per minute, instead of ten to fifteen liter. It means that in thirty years it has saved a large swimming pool of water.” The houses are going to be sold for a ‘very competitive’ price, according to Boy.

‘What will be your legacy for the next generations?’

Holiday resort residences
Forest Living hopes to have built a first ever pilot residence in July. The production must be afoot around New Year’s eve, to be able to produce the first houses for interested parties. “We are talking about five parties who are interested in our residences, varying from a few to larger numbers. I am not able to disclose a lot of information about the interested parties with whom we are negotiating.  However, what I can say is that they are individuals. We are also going to supply holiday resorts and other ‘players’ in the recreational sector. We are focused for the time being, on building holiday resort residences. However, we are able to make everything from garden sheds and bed & breakfasts to multilayered detached residences.”
The idea was born a few years ago, when Boy and Johan were hiking in the Hattemerbos (Forest of Hattem). That is why they chose Forest Living as their company name. “Nature is giving more than she is taking. People are the complete opposite. As a human you only live a small century. But what will be your legacy for future generations? A gigantic footprint of Co2-emissions, the consumption of raw materials and the pollution of the earth. Our buildings won’t leave a footprint behind.”

‘Our salary won`t be exorbitant’

Boy is calling himself a tree-hugger however, he isn’t actually hugging trees. “If we all are choosing to live sustainable, the earth will last longer.”

Fire resistant
The duo started the company Forest Living and used the last two years to develop their ideas. It did take a lot of time to discover if the original idea was really feasible. Boy and Johan are in the last phase of their extensive feasibility research in which they had to overcome different challenges. “ It turned out that the first plastic elements we wanted to use did not meet the fire safety requirements. Then we spend months analysing what we had to change to make it fireproof.” Their company is supported by Windesheim`s professorship Polymer Engineering and is accommodated at Green Pac I-lab, a start-up-hub on the Ceintuurbaan in Zwolle, where a lot of starting student companies are accommodated. The boys have a large hall at their disposal where they are able to experiment and develop. In the meantime Forest Living has grown and now consist out of a team of nine people, all Windesheim students of different study programmes and with two additional specialists.

Their own capital
The team has invested a lot of their own money over the years, so that one day we all can reap the benefits. Boy: “For example: Johan and I have sold our previous companies to be able to invest in Forest Living. We have spent tens of thousands of euro`s only to see if our plan is feasible and everything had to be self-developed, including the machinery.”  Only when the first residences are build we hope to be able to grant ourselves a salary for the first time. “The main use for our proceeds is to reinvest in our company so we can keep expanding, our salary won’t be exorbitant.” For the future? “ I hope that in five years our residences will be mass produced.”