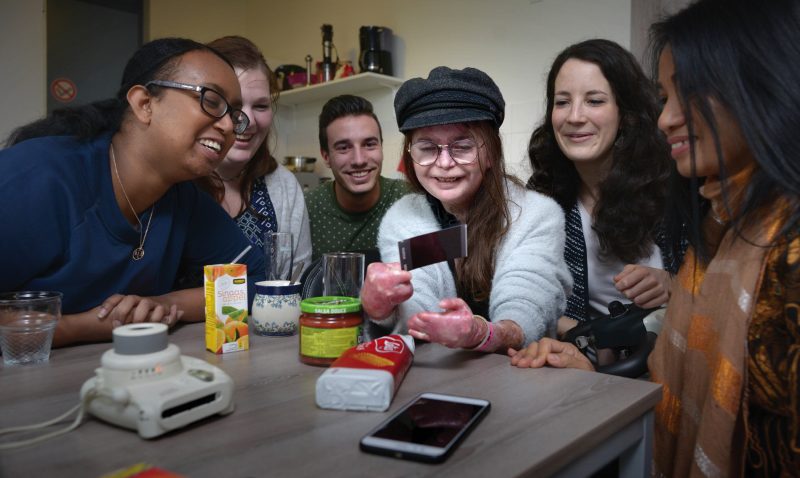 Nina (with the cap) and her caretakers Elise (second to the right) and Dina (left): “All the moments with her were beautiful.”

The exchange student Nina Roma (27) suffers from a rare skin disease called epidermolysis bullosa, better known as the ‘butterfly disease.’ Still she insisted on studying abroad. Nursing students from Windesheim made that possible by voluntarily taking care of her during the past half year.

Because of epidermolysis bullosa Nina needs intensive care every day. This is because her skin is so fragile that her body is both internally and externally extremely prone to blisters and wounds. Her limbs are deformed as well because of the scar tissue that came into existence through the years after the healing of old wounds. Her condition is progressive and thus Nina will always be dependent on others. But she definitely doesn’t see her restrictions as a bother. “I find it important to be positive and show that I am not a stereotype.”

Proud of her choice

Nina chose, mainly because of practical reasons, to study in Zwolle until the end of January. “The Netherlands is a physically accessible country with lots of good facilities. I believe that there are people all over the world that could help me, but I myself would have to take a lot of stuff with me. In my hometown Barcelona I have my own ‘scooter’, but I can’t take that abroad with me. In the Netherlands that is well taken care of, I could borrow a scooter there.” Studying abroad was a dream come true for Nina Roma. “My mother agreed that I wanted to study abroad, but my father found it hard to accept that I could still study abroad despite my circumstances.

‘Nina has learned to live with the pain, in a way’

At first he didn’t want me to go, but finally he was proud after all that I made that choice for myself. My friends and family have always treated me as a ‘normal’ human being, so that I can be who I want to be.”

‘Desperate measures’ During the half year that Nina studied international business at Windesheim, she was taken care of by five students: three from Windesheim and two from University of Applied Sciences VIAA. The care that she got daily lasted from three to four hours and every nurse had a weekly fixed morning with her.

‘It quickly became comfortable and cozy with one another.’

Windesheim student and home care assistant Elise Kuipers (26) was one of Nina’s nurses. “Nina has learned to live with the pain, in a way. The right care can lighten her pain, but it does take a lot of time. We had to clean and bind her wounds in a special way: that al has to be done correctly. Sometimes they say ‘desperate situations call for desperate measures’. Nurse Dina Osman (21), who studies at Windesheim and also works in homecare too, gladly helped Nina. “I found it really impressive that Nina, despite her condition, still wanted to go study abroad.” During their first meeting with Nina and her parents, who showed how Nina had to be treated exactly, they learned a lot. “Wound care was something that I had never done before, so for me that was a whole new experience.”

At the beginning the girls had to get used to each other’s day- and night rhythm. “On Tuesday there was often a party mood in the house and I went out at night. But on Wednesdays I would be super sleepy!”, laughs Nina. “I am absolutely no morning person, so at the beginning I found it hard to explain everything in English to the nurses so early. You have to think extra hard, it wasn’t all that nice. But you see each other for half a year, sometimes multiple times a week and we quickly got comfortable and cozy with one another.”

Elise agrees. “In the morning she had those little sleepy eyes; I found that really cute. We got close with each other quite quickly, as we both loved travelling and Spanish music and the language. Later I also hung out with Nina outside of the caretaking moments to do fun things; drinking coffee and going to a café together.”

Dina too had a great time with Nina. “All the moments with her were beautiful. Lots of laughing and chatting and there was always a nice atmosphere.”