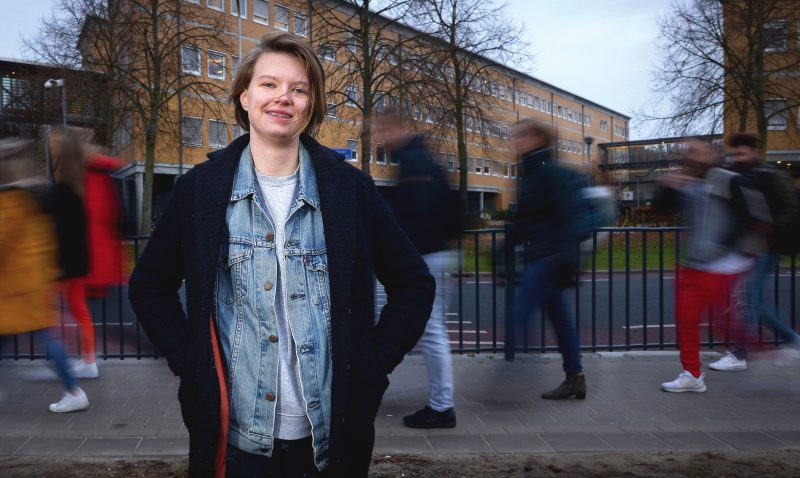 Nica does not feel comfortable in his body. Soon he will start the process to officially become a man.

For years he has known: I am a girl, but I don’t feel like a girl. That is why, a year ago, Nica Brüggeman (18) made the decision. He will start the process to officially become a man. “This is it. Everyone is allowed to know. If they find out through this interview: that`s fine.”

In a few months it’s time. Then the course begins in which Nica, first year Law student, will slowly become a man. “I have been waiting so long for this. Still I am not looking forward to it: I haven’t told everyone yet. I haven’t told my distant family and my colleagues, for example. But it is time. It is what it is. If people find out through this article, then that will save me a lot of uncomfortable chats.”

Princess dresses
Because Nica is quite certain by now: despite him not having the sexual characteristics, he really is a boy. Nica doesn’t want to be called ‘she’ anymore because of this. “No, I am a ‘he’.” That realization came with the years. “As a small child I was very girly. I wore princess dresses and played with barbies and my clothes were pink. There were no signs yet that I felt like a boy. But gradually I did start to get that feeling. More and more often. And I didn’t know what to do with myself. At a certain point I was done. I decided to wear boyish clothes and cut my long hair off. Because I also had a relationship with a girl, people thought that I was ‘just a dike’. But that wasn’t it.”

Frustration
Because there was a lot more going on: Nica did not feel comfortable in his body. “That downright sucks. As far as I’m concerned, it is not like if you have the sexual characteristics of a woman, you are a woman too. That definition just isn’t correct. Every time when I look in the mirror, I feel it: this isn’t right.

‘They thought that I was just a dike, but that wasn’t it’

That gave me frustration every morning. I have also had a lot of issues with depressions. Luckily there are moments in which people address me with ‘sir’. I myself can see that I don’t look very feminine; I have a broad jawline, little womanly curves and of course I dress manly. Still it often happens that people see me as a woman. I simply do not have a beard yet or a deep voice. I am often sad, because I would just love to be normal. Just, happy with my gender.”

Breast removal
A little over a year ago Nica made the decision to officially become a man. “I am currently in a queue of three months. Firstly, I have to talk to some people that want to know what I réálly want. That psychological part takes about half a year.

‘When I look in the mirror I think: this isn’t right’

Next starts the hormonal treatments and finally, a year later, there is an operation. I am having my breasts removed, but that’s it. I don’t want to have a penis made. That feels a bit incomplete, but it is a really intense operation, while the result isn’t even very nice. That’s not all, they have to remove skin from your arm for this and that will forever leave an obvious scar. I don’t feel like constantly telling the same story when someone sees it. A put-on penis will never work well,like a real one. I’d rather buy a tool to help with the sex or as a filler in my pants.”

Daughter becomes son
By now Nica’s friends know that he is transgender and they really emphasize with him. “When I started with my study programme, I decided to also tell a few classmates. They responded really relaxed, while they hardly knew me. My parents are not happy with it; they find it very hard. They find it hard to think of the idea that soon they will not have a daughter anymore but a son instead. It is especially hard for my mother: she does her best, but it is not working out yet. My father is more easygoing. He says: you have to do what makes you happy and we have to accept you. I hope that my mother will start seeing this too.”

Quality of life
When Nica finally becomes a man, a lot of practial inconveniences will cease. “I can’t wait to just take off my shirt during the summer, and not have breasts there. Now I use compression clothing, but that is very unpractial. Without these inconveniences the quality of my life will improve by a lot. Just like my mental state. Still my mental issues will not go away entirely, because the fact remains that I was not born a boy and I find this hard. So it will still take years before I am fully happy. But all in all it is good that I will become a man. If I don’t, I don’t know if I’ll still be here in five years.”