‘Now I have to fight the trauma’

Hilde Houweling was only sixteen years old when she started to develop Anorexia Nervosa. A battle that lasted for many years. The now 22 year old student slowly starts to live a normal life again. But how do you do that after having an eating disorder?

Hilde started studying Social Work on Windesheim this September. She choose the study with a clear reason. “I want to help people with Anorexia Nervosa as an experience expert later. That is my dream, but to recover is my first priority.” Even though Hilde is on the right track, there is still a lot of work to do. “People think that I am doing better, since I weigh enough and don’t look anorexic. However, I am not really free to life yet. To really lose the anorexia I need to address my traumas, which is terrifying.”

Abused by coach
Because Hilde’s eating disorder developed after a blustery period. “When I was around ten years old, I started to play Hockey. Soon the dream to get into the Dutch National hockey team arose. My coach gave me confidence while he told me I could do it and this motivated me. But he started abusing me when I was eleven until I was thirteen. I kept it to myself for years, I was afraid no one would believe me. When I was fifteen I told my parents. I reported to the police, but my coach denied everything. I really suffered from that.”

“I reported to the police, but my coach denied everything”

Even though Hilde had to deal with the trauma, she kept on playing hockey. “My new coach told the group that we would achieve more when we had lower fat percentages. I still wanted to get into the Dutch National team, so I made that my new goal. We all started to watch our food, but most of the girls let it go after a couple of weeks. But I thought: “I have to continue”. That is when my eating disorder started. The underlying cause was the abuse, I didn’t have any control over my trauma but I did have control over my food. That felt good.”

Hilde is recovering from an eating disorder: “I started to see that life can be fun again.” 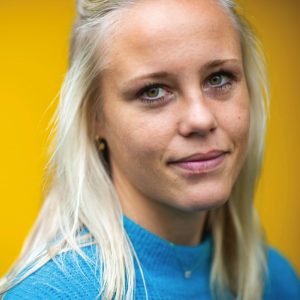 Loss of hair and painful bones
When Hilde was sixteen years old, she went to Barcelona. In Barcelona she was able to play hockey in a top team. “My parents told me I could go there as long as I would watch my food. I was already busy dieting and they noticed that. Of course I told my parents I would, but at the same time I felt I couldn’t let go of it anymore. I lost a lot of weight in Barcelona. At some point I couldn’t do it anymore: I couldn’t play hockey anymore, I fainted ten times a day, I had hair loss and I couldn’t sleep because my bones hurt. I felt incredibly lonely at the time. That is why my parents decided to bring me home.” Back in the Netherlands, Hilde was diagnosed with Anorexia by a pediatrician. She denied it for a long time. “I felt strong in my eating disorder. However, I noticed that at a certain point the disorder took over. I didn’t have a choice anymore. I went to a clinic and also went to Portugal to follow a treatment. When I was at my worst I only weighted 32 kilogram and had a heartbeat of 34. Years of therapy and treatment followed. I was put in a clinic in Amsterdam this year. I was there from January until April. I worked on my weight recovery there.”

“I believe in 100 percent recovery”

No double life
Hilde wrote a book about her eating disorder. She also was followed by the TV series Het Voedselgevecht (a Dutch TV program where youngsters tell about their eating disorders). “I started the book three years ago. I could cope with my feelings when I was writing. This worked therapeutic. After a while came the dream of publishing the book, to show people what an eating disorder is really like. That there are always underlying issues.” Hilde also showed her vulnerability on the TV series. “It feels good to do so. I am not living a double life anymore; everyone knows about it now.” Hilde received a lot of positive reactions on her book, the TV series and the media was positive as well. “Even from people that I don’t even know. However, I also get some nasty reactions. People say: You can just eat, right? If it were that easy I wouldn’t have put my life at risk.” At Hilde`s study they are compassionate. Especially if you study Social Work you learn to be vulnerable and to try and understand someone else.’’

Normal life
Now that Hilde is studying again, her life kind of got back to normal again just like other people her age. “I started to see that life can be fun again. Studying does cost me a lot of energy. I am not there yet: when I go out for drinks with my friends, I always order something with the least calories. Spontaneously going out for dinner makes me nervous. I would love to just do what other people my age do, but the spontaneity isn’t there yet. However, I do believe in 100 percent recovery. I think I will manage.”