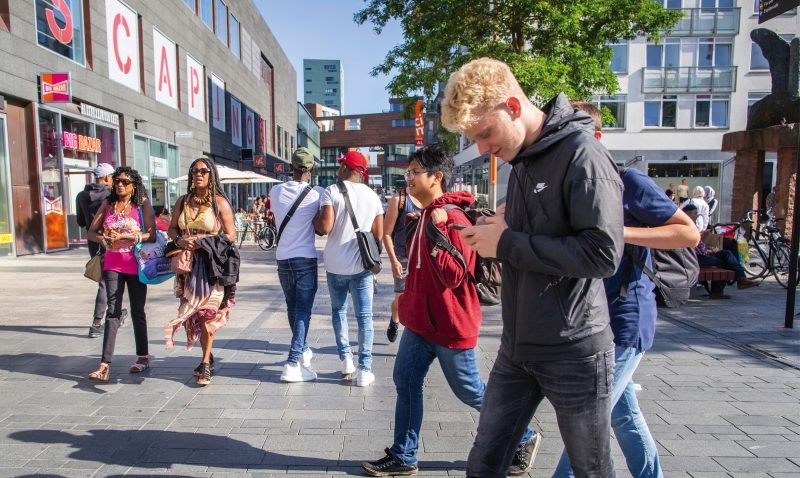 Almere is ‘booming’ among students and young professionals. Student city Almere is growing fast. Why is that?

Almere used to be watched critically. It’s not exactly a student city. However, this has changed a lot during the past few years. Student Business Management Studies Danny Hensen: ‘When I started out with my study program, it was still quiet at school and in the direct environment. These days you see students walking around everywhere and the ambiance is also different because of this. Where there used to be the ‘shoppers’ of the centre and a few students, it is now much more of a mix. It simply feels livelier when you walk through town, unlike four years ago.’ One out of five residents in Almere-Centre is a student. Rien Komen, director of Windesheim Flevoland, sees that the inner city is slowly turning into a student paradise. ‘Students are the decoration of the inner city. They provide a nice mood, life: that image is what we like to emit.’

‘The inner city is a campus’
Sixteen hundred new first years applied to Windesheim Flevoland for the upcoming academic year. The establishment of Windesheim grows up to four thousand students and the educational institution has to extend with more locations because of it. Three years ago a part of the library was furnished for the Teacher Education division and Social Work. Former student Marketing Management Dempsey Schijffelen: ‘I was from the first generation of 2011. The first few years were a bit calm, but ever since Windesheim put study spots in the library, these have been really crowded, especially during finals.’ From September on Windesheim Flevoland will open another location in ‘Het Baken’ where technical degree programs will be located among others. In Almere there are two Universities of applied sciences located: Aeres University of applied sciences and Windesheim Flevoland. This Windesheim location has no surrounding campus like Zwolle, but the students do use the facilities in the city. ‘The inner city is our campus’ tells Komen. ‘The small-scale and the safety attracts students and the accessibility is great. The travel time for students from het Gooi is for example shorter compared to the Universities of applied sciences of Amsterdam or Utrecht.’ Danny is happy with the location in the centre: ‘The building has two supermarkets, all kinds of terraces at a walking distance and of course sandwich bars where you can eat in between lectures.’

According to Komen most Windesheim students from the past few years came mostly from Almere itself, which is why the number of students who didn’t live at home was not so big. That is changing too, because there is a pressing need for student residences in Almere. This is why during the coming five years student residences will be built in more places: the Socius Wonen of Utrecht transforms the red empty building across from the Almere city hall into ‘De Aardbei’(‘the Strawberry’), a residential complex with eighty-two student rooms and starter apartments. The Housing Corporation Ymere also realizes more and more housing projects, like the old office buildings that are being transformed into student rooms and starter apartments. This as an addition to the student rooms and housing containers at the Odeon-street and Dichtershof. Students who soon want to start living on their own have to be patient for a while.

Entrepreneurial spirit
The municipality Almere is built from eight city districts at this point. Almere is no longer a sleeping commuter town, young people that grow up in Almere feel a strong connection to their city. What characterizes them, according to people in Almere, is their entrepreneurship. At the beginning of this century the slogan ‘It’s possible in Almere’ was introduced by Almere City Marketing and this term is part of the Almere identity. ‘You see more and more start-ups by students in Almere,’ tells Dempsey. ‘A lot is possible because it is all still so new: so, real pioneering!’ After his degree course Dempsey started out at Almere City Marketing and has set up the social media campaign: ‘Student in Almere’. ‘Since May we have started a video campaign in association with the Almere entrepreneurs, this is to get young people familiar with the Almere student life. We take care of student discounts at nice restaurants or stores and we keep the students updated on parties and activities.’ Entrepreneuring fits with the character of Almere, emphasizes Komen. ‘We want to encourage this from the education too. A lot is possible in Almere.’ The young school administrator gets enthusiastic when students are persistent when working out new ideas. The formation of student houses, bars, associations and a great introduction week are important conditions to Komen in order to become a real student city. ‘In Zwolle you have the Bruisweken every year, we want to work towards this in Almere too. The amount of student activities has not yet grown with the amount of students so far.’ Clearly, there is still a lot that needs to be done in order to be counted as a student city. ‘Let’s be honest’, says Dempley while smiling. ‘Almere is no Amsterdam or Utrecht, but we are growing!’

‘You can find everything here’
‘Plus, if you start with your degree course in September, you will graduate by the time that the Floriade starts’, emphasizes Danny. The Floriade is a huge world horticulture exposition that we will be able to be seen in 2022 in the area of Almere. ‘During the time that you spend as a student in Almere, you will be able to follow that project daily’, tells Danny. ‘All in all the motto of the city is not a coincidence – no matter how cliché it is – ‘It is possible in Almere’, because you can in fact find everything that your heart desires here.’ (RvA)

View all posts by Tim Verbruggen →