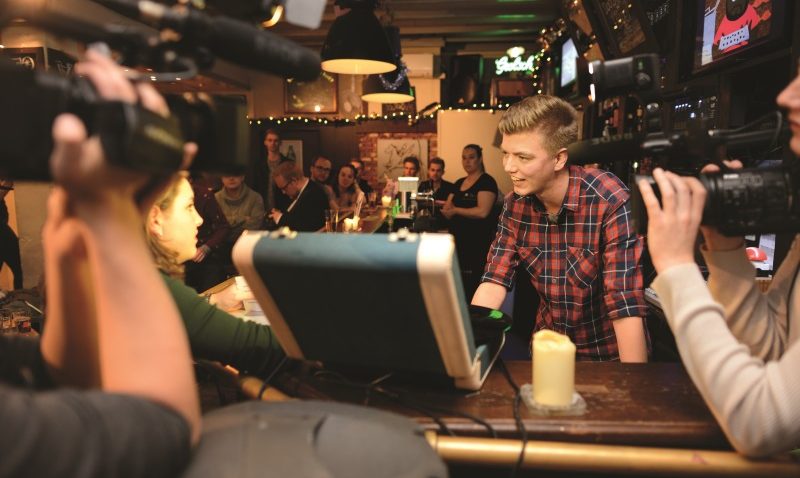 A music quiz, guilty pleasures, great stories and, of course, lots of good music. Student and music lover Bram van Kolfschooten will be turning Het Vliegende Paard into a Top 2000-café for a week.

“Let’s have a party! With ‘oliebollen’ and champagne, good music and great stories.” From Monday the 18th to Thursday the 21st Bram will be in the main room of Het Vliegende Paard to play records but mostly, to talk about music.

The past couple of weeks you could vote for your favorite songs and with that information, Bram was able to compile a top 300 which he will be playing from Monday. “A list of 2000 songs may be a bit too much for Zwolle.” Bram will be connecting the songs by talking about them and giving background information. He will be assisted by fellow students Adriaan Andre and Eva Heijne. “Usually, you go to a bar to listen to music and dance. We want to add a new dimension to that. That would be to listen to the stories that drive the songs; the why in why an artist wrote a specific song and what it means.”

However, there are also a lot of musical activities planned. “With that, we’ll be joining the usual program of Het Vliegende Paard. For instance, on the Tuesday evening will be themed around corny songs and guilty pleasures from the list, the best of the terrible. On Wednesday evenings there is always live music, so local artists will come over to perform songs from the Top 2000.

At the end, on Thursday evening around midnight, Bram will play the number 1 song on the list, but he does not want to give away which song that is just yet. “Paul van ‘t Veer will be teaching us about that song. He is a DJ and owner of the record store Plato in Zwolle as well as dance programmer at Hedon. He knows everything about good music.”

Great stories
Bram is a real music lover. “I like looking into how bands were set up, how artists live or how certain genres came into being. I get my knowledge from documentaries, books and the internet. I also speak with a lot of people and visit a lot of places. For instance, in London I went to the street where the cover photo was taken for Oasis’ second album. In the record store, which is featured in a corner of the photo, one can listen to a lot of great stories as to how that photo made the record store such a success.”

Bram had his internship at Radio 2 and at 3FM. “At Radio 2 articles which I had helped create were featured almost every day. Very cool, especially when you read messages from listeners saying that they really appreciate the article. The idea that you can influence what people listen to and to get them to hear new things and get them great stories is amazing!”

Never mind
Last year Bram recreated the television program Top 2000 a gogo at Het Vliegende Paard. They spoke with the guests about music, held a quiz and had the guests listen to fragments of music. How did that start? “Journalism student Peter de Jager and I have wanted to be a part of the audience of the Top 2000 a gogo for years, but there are so many applications every time that there was never any room. Last year we were so frustrated that we decided: never mind, we’ll do it ourselves.”

After they were done, they were asked to take over the main room for a week for the following year. Bram: “A great opportunity to do more! Last year we played very little music. It really was a television show which lasted an hour. This year, we will be there for four evenings from 7pm until 12pm, which means we can play the entire list. So, everyone, come on down! We’ll make sure it’s worth the effort!”

*Oliebollen are a traditional dish made by deep frying balls of dough. Commonly eaten around new year’s eve.