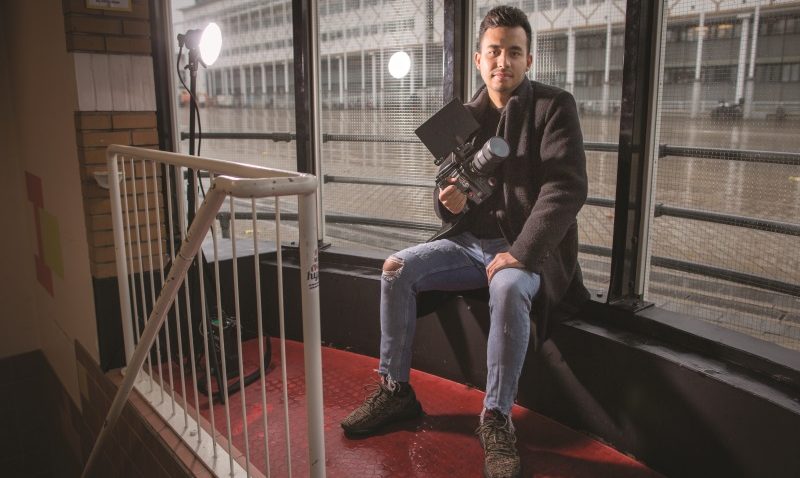 Over the course of a couple of years, Entrepreneurship student Rayn Berkhout has founded and set up a successful film company. He creates commercials and videos for huge names and brands such as DJ Hardwell and Albert Heijn.

‘At the moment I’m editing an aftermovie for a campaign for Absolut Vodka. About 27.000 people around the globe are involved with this project and will be seeing my work. That’s quite a scary thought!’ says Ryan Berkhout. He’s doing the associate degree Entrepreneurship at Windesheim Flevoland and is the founder of his own company: One Army Film. He mostly creates promotional films, aftermovies and business videos. Rayn takes care of the entire process of the making of a video: from coming up with a concept, to filming, editing and adding special effects and editing music.

Ryan has been working on video projects since secondary school. ‘I started off experimenting with a friend of mine who was doing a course in Film. at a certain point, we saw a message from The Partysquad: at the last minute, they were looking for someone who could shoot an aftermovie for their show at Amsterdam Dance Event. Unfortunately, we weren’t the only one how were interested, so we ended up doing just some camera work, but it was crazy to think that we were working for such a huge name!’

Insecure
Collaborating with the The Partysquad did good things for brand awareness, but they didn’t make much money from it. ‘The traveling and renting of equipment ended up costing more than what we earned, but that was okay; I was mostly working on creating a portfolio anyway and I still had a lot to learn about creating films as well as the business side of it all: how do you sell your services? How do you negotiate?’

‘It started with simple experimenting’
Rayn is currently doing the associate degree in Entrepreneurship , which is a two-year HBO course. ‘There aren’t many study programmes in which you are so intensively guided, which took some getting used to. The teachers might as well be your parents: how are you? Anything we can help you with? But that guidance is incredibly nice as I am still quite insecure. This study programme has us doing a lot of presentations in front of our classmates. This has helped me gain experience and more confidence.’
Over time, Rayn’s company got more clients with bigger names. ‘I even got to work on an aftermovie of a show by DJ Hardwell.’

Ryan would like to buy a professional 8k-camera worth €30.000. ‘They use those a lot in Hollywood. But I didn’t have the finances myself, so I had to look for an investor.

The study programme teaches me how to write a business plan in which I mostly explain how I will solve a client’s problem, and it works: I got offered credit!’. That wasn’t necessary anymore in the end: Rayn’s stepdad lent him the money in April this year. Now, Rayn has done enough projects to pay him back.

Transferring to feature films
Over the course of five years, Rayn’s company has grown from a hobby into a serious business that works for huge names. Meanwhile, Rayn’s work can be found on many popular websites, on tv and billboards but Rayn (currently 23) wants more: “I find growth very important and I wish that I’d already achieved more at this age than I have. I want to found more companies: shops, restaurants, hotels. Once one of them is successful, I will move on to the next challenge.’

What is the next step? Rayn is mostly creating commercials and aftermovies at the moment, but he wants to make a transfer to feature films. ‘In the end, I want to make real Hollywood productions. Dutch films are not that well-known, but there are definitely exceptions. Take Oorlogswinter or Brimstone, for example. Those are films by Dutch directors who got a lot of recognition internationally and made huge profits. There is too little appreciation for Dutch films, when, in reality, our country definitely delivers quality.’

A small portion of Rayn’s clients: