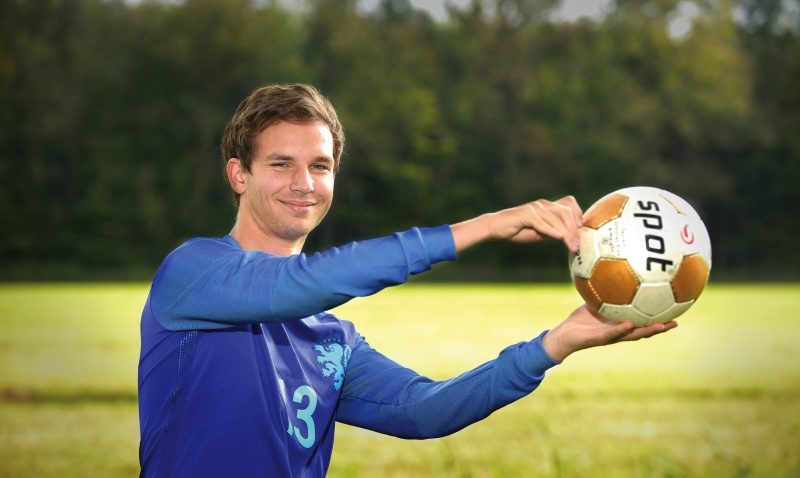 Playing football with a motoric disorder

Jeroen’s arms, legs and ears don’t do what he wants them to do

Student Jeroen Duin has cerebral palsy (CP), a disability that causes him to have difficulties with daily proceedings. This leads to difficult situations, but it also has a bright side: recently Jeroen took part in the world championships of CP-football.

“Shaking hands is an uncomfortable experience every time, because I can’t do it very well.” Because of congenital brain damage, Jeroen Duin, second year student in Human Resource Management, only has limited movement in his right arm and leg. “You get used to it eventually, but it’s still bothersome. With every birthday I think: ‘Do I have to shake hands again?’ Sometimes I just say ‘Congratulations!’ instead of sticking out my hand.”

Jeroen’s limitation is called cerebral palsy, CP for short. Due to an oxygen shortage during his birth, his brains were partially damaged. Because of this, he has difficulty using some of the muscles on the right side of his body. They are less strong and have trouble working in unison with other muscles. Because of this, Jeroen’s motor function is limited. “For instance, I am unable to turn my wrist properly. Holding a serving tray or lifting a box are things I am unable to do. In the event that I have to do so anyway, I don’t pick things up with my hand, preferring to balance it on my forearm. That is a lot less stable, of course.”

Lack of understanding
Jeroen’s hearing has also been affected. “If I sit next to someone in a quiet space, I can understand that person. In a group or rowdy situation, however, it gets a lot more difficult to understand people. It happens that when I am with classmates or friends in a group, people sometimes ‘suddenly’ walk away. This happens when they have made plans to go somewhere, but I didn’t hear it.”

This problem was especially apparent for Jeroen during high school. “I used to sit in places with lots of background noise with my classmates. The aula, for instance.

In those places, I was often excluded from a conversation, which kind of sucked! Dealing with others proved to be quite difficult. There was a definite lack of understanding for my disability.”

Things have gotten better by now, however. “At Windesheim I took the time to explain to my entire class what my disability is. Because of this, people understand what’s going on and how they can deal with it. I don’t get any more funny looks when I ask someone to repeat what the teacher said.”

‘Dealing with others proved difficult’
By practicing a lot, the problems have become smaller. “Physical therapy, ergo therapy, speech therapy… I’ve done these for years. I can now relax my hand and leg, while before I had to keep them tense all day. That was very tiring!”

Jeroen has stopped these things now. “I have very little motivation anymore. If I were to continue, things might improve marginally, but not by a lot. I don’t think that’s worth the effort.”

Speech therapy was offered to Jeroen because, due to his hearing problems, he had difficulty learning how to speak. “I used to not be able to articulate very well, and didn’t speak loudly either. I believe I speak more clearly now, though I do need to repeat myself from time to time.”

Shivers
Jeroen’s biggest hobby is football. “For quite some time, my physical therapist forbade me to play football. Instead, I played other sports, such as judo and ping pong, but I didn’t enjoy those. Eventually, I nagged for as long as I needed to, to be allowed to play football.”

His mother enrolled him for CP-football. Jeroen stood out and kept getting better. He even got selected for the world championship of CP-football, which was held last September in Argentina. That was a very special experience. “I had real shivers running through my body. Barely 19, and taking part in something this huge. The plane trip, the massive stadium, singing the national anthem: all of these things brought a massive amount of emotions with them.” In between matches and training sessions, Jeroen was able to have plenty of time to relax. “It was thirty degrees there and we were stayed in a wonderful hotel, so the stay was very relaxed.”

The Netherlands worked its way through the initial phase, but lost the quarter finals against the Ukraine with a score of 0-7. “That made sense. That country was Paralympics champion last year. Nobody can beat them.” Next year the European championships will be held in the Netherlands. If it’s up to Jeroen, he’ll be taking part in that as well. “You do need to be selected to join that, and by then I’ll be doing my internship. I hope I am able to combine these things.”