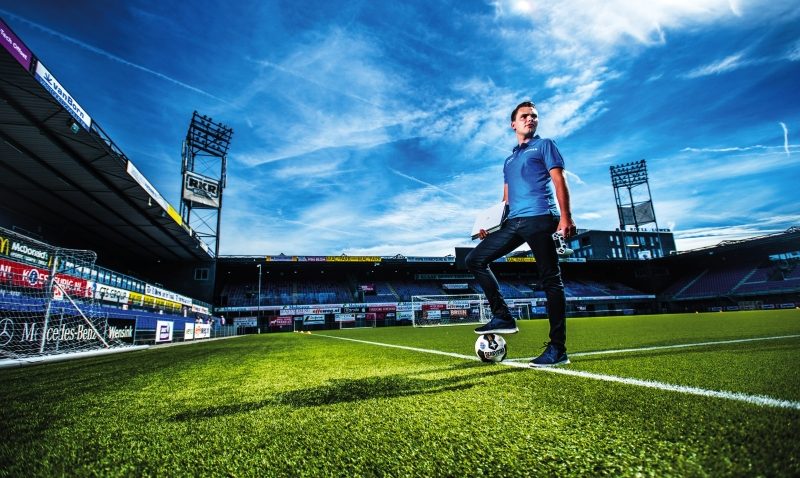 Student Stefan defends the honour of Zwolle in ‘e-division’

Recently, Premier League clubs have also been fighting about who’s the best of The Netherlands in the virtual world of FIFA17. Every club has their own ‘e-s porter’ employed.  CALO-student (Teacher Education in Physical Education), Stefan Vellinga, defends the club colours of PEC.

Roberto Carlos breaks through on the left side of the field. His brilliant assist is silvered by Luis Suárez. Stefan (24) clenches his fists: “Come on! Yes! Come on!” His virtual star team, wearing PEC Zwolle-attire, stands in front of their arch-rival Go Ahead Eagles. Every round Stefan competes with his so-called ‘Ultimate Team’ with a gamer from another Premier League club. These e-sporters are actually under contract and help out in order to enlarge the fame of football clubs among teenagers. The most important competitions in the ‘e-division’ get over a 100.000 views on YouTube.

Selection tournament
Stefan has been playing FIFA ever since he was five years old. “My dad passed away and my mother gave me a PlayStation 1 as a distraction. Since then, I was always playing on it. I played a lot of FIFA, but it never really got serious. Until a selection tournament was being held by PEC Zwolle, who were seeking an e-player, at the end of last year.” Gamers from all over the country participated in that selection tournament. He was defeated during the semi-final, but still got chosen in the end. Why? “The big picture made sense. At my internship I already work with teenagers and I have a history with the club: I’ve played in the youth rankings for two years and I am the supporter of the first hour.”

A game in the e-division is incomparable to regular games of FIFA, according to Stefan.

“During weekdays I often play with friends, but I really see it just as recreation. In the e-division the game is mostly about your tactics.

‘When PEC becomes champion, so do I!’
I actually train for that as well: I re-watch competitions of myself and those of my competitors, and then try to think of new variations. It all seems so simple, but you really have to enforce everything. How much pressure make, for example. If you do that the wrong way, you are easily tapped out. You really need to find the balance in that.”

Virtual IJsselderby
E-sporting is actually mostly a mental game. “There is a lot of pressure… if you neglect one thing in your mind, you also do so on the screen. I use the pressure to my benefit: I try to talk my opponents out of the game. This is why some of them put on headphones to play music. I think that’s a shame.”

On order to be mentally well, Stefan makes sure that during the days before the game he eats well and exercises. “When you’re healthy, you perform much better than when you’ve been gaming forty hours a week. I always go into a game relaxed, try to make some jokes. That’s what works best.”

Especially the virtual version of the derby PEC Zwolle opposed to Go Ahead Eagles (from Deventer) is incredibly exciting, Stefan says.

“That boy is really good, but he never finishes his chances.” He was trying to get me mad beforehand. “Competing with you, I dó finish my chances”, that sort of stuff.

He has also been practicing on rounding off for two hours. Naturally, I was shaking with my controller during the game. And it was indeed a terrible game, but I did score ánd I won! The discharge that I felt then… yes, that was magnificent.

Handing out signatures
With vlogs and life streams Stefan keeps his PEC-supporters updated on his achievements from behind the PlayStation and also in his personal life. Every now and then he also plays FIFA-competitions against PEC-players, like Bart Schenkeveld and Kingsley Ehibizue. With this he has already built up quite the fanbase. “A while ago I was in the stadium during a game, when suddenly I heard that children were screaming out my name from the other side of the stadium. I was called after on the streets, took pictures, handed out signatures. It was bizarre, but above all really fun.

‘Children were screaming out my name’
The e-division is, according to Stefan, still plentiful growing. “At the moment we have a few days a year during which all e-sporters gather and at the same time we record a lot of competitions. However, naturally it would be the most fun if we actually played the e-division competition during the actual competition days. At the stadium, for example, during the break. I think it will take a few years before that’s the case.”

This season Stefan finished in fifteenth place. “I am not satisfied with that. Mostly because there – especially seeing my field game – was more to offer. I keep saying, with a wink: if PEC becomes champion next year, then so will I!”