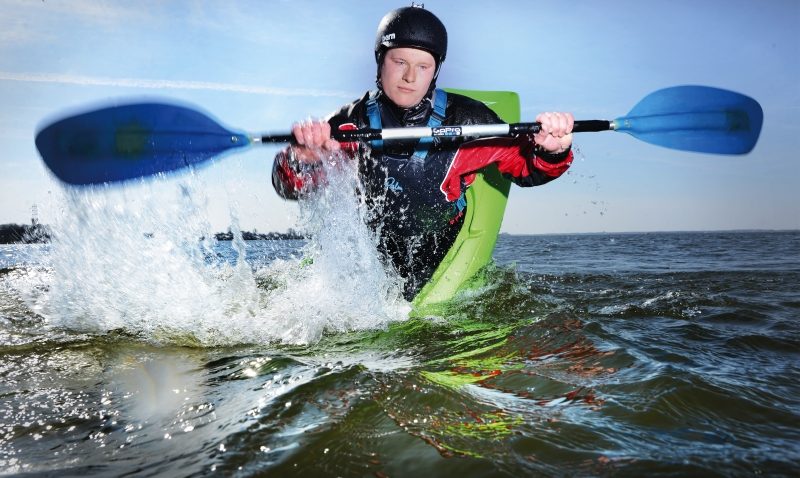 Stunting in a canoe

Brenno is the best freestyle-canoeist in the Netherlands

Three years ago, Windesheim student Brenno bought a canoe so he could ‘paddle away’ during a holiday. Since then he does little else. He prefers doing tricks. That is what won him the National Championships freestyle.

Tricks in a canoe, how do you do that?! Brenno Prakken (21), second-year small business and retail management, does not think twice about doing a somersault, corkscrew or cartwheel. “A forward somersault is made by balancing on the front of the canoe and ‘pumping’ yourself downward with your paddle. The deeper you pump yourself downward, the higher the water comes up. When I shoot out of the water, I put all my effort into making a somersault above the water, with canoe and everything.” The height of his jumps is the reason he won first prise in 2016’s National Championships. “I got off the water with all my moves, and I received bonus points for that. You need a lot of strength to do that. I have been working out for years, so it comes in handy with this!”

Bouncing ball between the legs
To perform his canoe tricks, Brenno has a special freestyle canoe. “It is just under two meters long, and is more manoeuvrable than a longer wild-water canoe. And to make sure I am fully secure in my canoe, I have a bouncing ball between my legs. A regular one from the toy store. That works perfectly!”

Brenno’s favourite trick is a phoenix monkey, which is a pirouette of 360 degrees on the front of the canoe that is followed up by a forward somersault. “It was a difficult trick to learn: you make the pirouette with a paddle stroke of the right paddle blade on the left side of the canoe. This is an unnatural movement which needs a lot of power and balance. But it looks spectacular!”

A trick Brenno would still like to learn is a backward somersault on stagnant water. “It is incredibly difficult to perform, because you cannot make a swish like with a forward somersault. I have seen only one person do it and for as far as I know there are only two people in the world who can do it. If I could master that trick, I would be guaranteed to win the next National Championships!”

The National Championships are on stagnant water, but a freestyle canoeist can also perform tricks on wild-water.

“That water is perfect for somersaults but also for half-twists, which is a trick in which you make a 180 degrees turn in the air. Then you land backwards on the water. It is best not to try a cartwheel on wild-water, you will immediately be flushed away!”

Flood
To canoe on wild-water, Brenno goes to a wild-water course in Zoetermeer, or he visits Germany or Austria with friends in the summer. ‘Just’ to descend a river with a canoe, or to practise tricks. A big adventure was his trip to Plattling, a German village which is also known for being the Mecca for canoeists. “It has a quiet river with a built-in dam, so you get nice waves on which you can surf and practise tricks.” Brenno and a friend drove to Plattling together, with the intention to continue driving to Austria. “At Plattling our car broke down, so it had to go to the garage for a few days. We decided to stay in Plattling. The first day the water was low, but slowly it got higher and the current became wilder, so we were able to practise all sorts of tricks! Yet at a certain point the water level was only one centimetre under the shore and our tent were on low-lying land. So in twilight and in the rain, at eight o’clock in the evening, we broke down our tents and drove back and forth three times in our rental car to get our stuff to higher ground. And right we were: the next day the area was flooded!”

Hobby or work?
Despite his effort and enthusiasm for canoeing, Brenno sees no career for himself in the canoeing-world. “If I turn my hobby into my job, I will not have a hobby! So becoming a champion is not my goal, but I will participate in the championships on July 10. I want to be consistent in performing my tricks. I am already practising incredibly hard!”