Is the situation this dire? “Absolutely. Last year around this time we would already have around 25 candidates. The interest seems to have disappeared completely. And while we, according to me, should have at least a minimum of fifty to sixty candidates to speak of a real democratic system at Windesheim.”

What has changed? “Last year we still had real candidates that wanted to talk about what is going on. Now students and employees are quite content with the way it goes at Windesheim. Students are more focussed on their studies: they are less involved with the university of applied sciences. And the employees… When you get three candidates from 2000 employees you start thinking out loud: how important do you think your presence really is? And I start to wonder: do employees and students even want democracy at Windesheim?”

What is the CMR going to do about this? “Firstly, we moved the deadline for the candidacy application by a week. Everyone has until the 16th of April to apply. Furthermore, we are organising all kinds of activities to create more visibility for the CMR and the importance of participation.”

In the concept new Participation Regulation, that has been discussed between the Board and the CMR last week, it was mentioned that for each seat in the participation council there should be at least two candidates available. “That is unfeasible. If we would implement that now, the council will be abandoned. But for now, there will be no consequences for the next elections. We have objected this and soon the board will come with a new proposal. But if it does get implemented, and the interest for the participation council stays the same, it will have catastrophic consequences.” (MH) 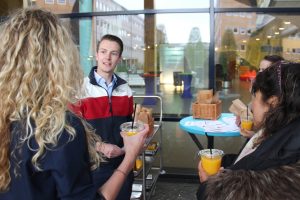 Boy Rolloos is serving free breakfasts this week at the main entrance, to arouse student interest for the participation council.