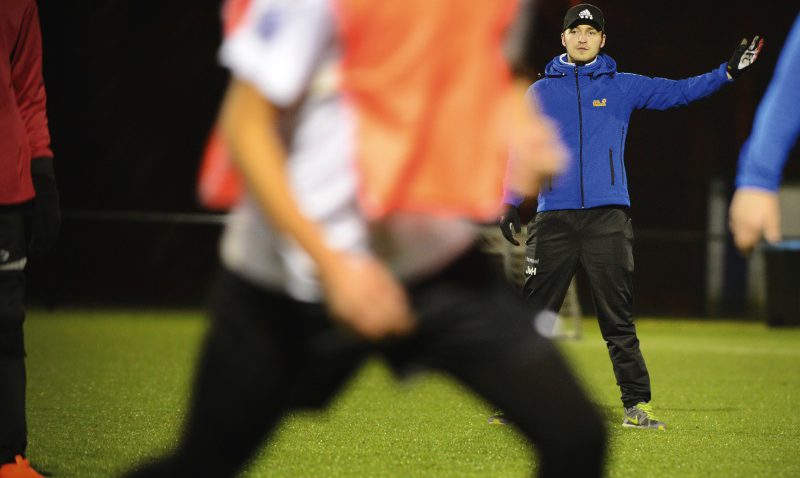 Training on the landing strip

From youth trainer in Almelo to head coach of Tuvalu, an archipeln the Great Ocean. It happened to Sports Management student Joost van Hateren. Last summer he was head coach of the tiny country for five weeks.

Ever since the young age of fourteen, Joost (21) stands on the football field as youth trainer. After an adventure in Brazil, where he coached a so-called favela club for around a month, he wanted to go abroad once more. “It started as an odd idea: wouldn’t it be mad if I could be head coach? Everyone I told burst into laughter, and then I knew this is a good idea. So, I went looking for an opportunity, which I found in Tuvalu.” The archipelago, that has 12,000 inhabitants, wishes to become a member of the worldwide football association, FIFA. Therefore, Tuvalu welcomes foreign trainers who want to move football forward. “Foppe de Haan had been a head coach there before, and I did some research on how that had happened. I ended up with a Dutch foundation that supports football in Tuvalu. From them I got into contact with the football union. There were more trainers who wanted to become head coach and they chose me. I haven’t found out the reason why myself.

National fame
When he landed in Tuvalu after three days of travelling, he could see a large crowd standing on the landing strip through the plane windows. “All those people were waving at us, so I waved back. I had no idea. I thought it was a common thing over there.” But then he stepped out of the propeller aircraft as the last passenger. “In my entire life, I have never heard such noise. Applause and cheering, is was a madhouse. I looked behind me to see if it was for the pilot, but it was for me. It really was for me!”

Office in government building
Football is the most popular sport in Tuvalu. There are eight clubs in total and they all represent their own island. “But the level of football these players are at is not high: the head trainers don’t really know what they are doing and not a single club has a youth education. You can notice that on the field. Those youths are quite good at football, it’s not that. Their ball control is fine and they are physically alright, but there’s no structure in the game.” It didn’t take long until Joost received a laptop, scooter and an office in the government building. He taught the trainers of the clubs, developed a game rules test and applied a players administration. “But the biggest problem was the absence of a proper education for young football talents. That’s why I educated youth trainers and started a youth academy.”

National team
Joost also trained the national team. “We did this at the landing strip, as the two only football fields of the country had razor-sharp stones and enormous holes from crabs that popped out of the ground.” Tuvalu played no international games under his leadership. They did play a practice match against one of the clubs. “It went okay. Our best player was Okilani Tinilau. That man is the national hero. He practised all sports and was also the best in everything. His enormous desire to work distinguished him from the other players. When everyone was enjoying their food half an hour before the training, he was already doing a warming up. That level of self-discipline is rare over there.”

Survivor
Although his Tuvalanuan adventure wasn’t a lazy holiday at all, Joost did enjoy the country a lot. “Tuvalu consists of a lot of tropical islands, like the ones you see in the tv show Expedition Robinson (Survivor). On my free Sundays went to the ocean to sail on my boat. There were dolphins and sea turtles swimming, and there was quite some coral, so it was a good place for snorkelling. We often parked at one of the small uninhabited islands. Making a campfire. Watching the stars… Yes, it was really awesome there.”

The current youth trainer of SV Almelo is not finished with travelling. “Now I’m in contact with several football unions, youth academies and clubs on different continents. There is a big chance that I will embark on another adventure abroad coming summer.”