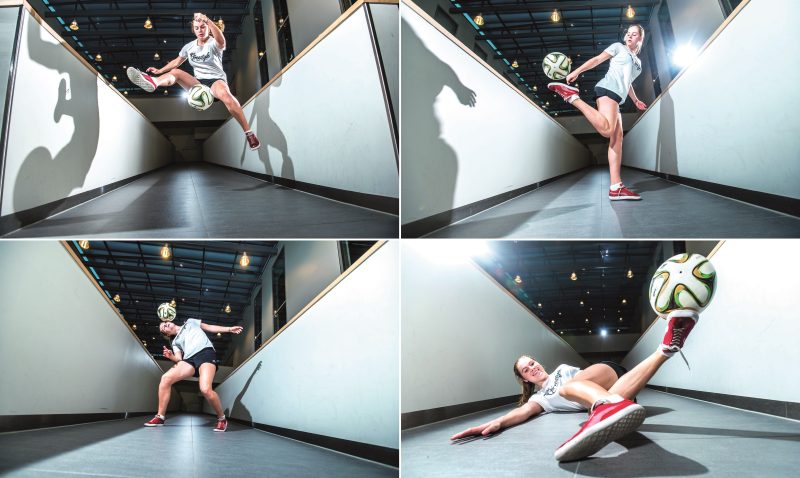 Tricks at the highest level

Second-years’ Jasmijn can do everything with a ball

Sitdowns, lowers, uppers: give student Jasmijn Janssen a football and the box of tricks will open. She reached fifth place at the world championship Freestyle football this month.

Freestyle, what is that exactly? “Doing tricks with a football”, tells Jasmijn, second-year psychomotor therapy. “With your head, knees, feet, actually every body part except your hands.” Freestylers compete with others by one-on-one matches, which have a duration of three minutes. “The challenge is to be as creative as possible and to show what you’ve got in a short time span. How you do it is entirely up to you: no one can tell you if something is wrong or right. You are free to discover your own style and that is the best part of this sport. I specialise in ‘sitdowns’ and ‘lowers’, tricks you perform respectively sitting down and with your legs. I still have to work on my uppers, which you perform with your head.”

Thousands of spectators
Her own style had developed so well, that Jasmijn could participate in the world championship in Melbourne this month. “The eight best ladies and sixteen best men of the world showed what they’ve got over there. I hadn’t qualified for the world championships, but because someone got injured at the last moment, I got a chance to participate. It was amazing to battle on the day of the finals on the main stage with thousands of spectators, both in the arena and via the livestreams. I eventually lost to the fourth-place winner after a wonderful battle and came fifth. However, I made it far as a Dutch champion of the ladies, so I’m totally not bothered.”

‘Battling, with thousands of spectators, was amazing’
The world championship was not Jasmijn’s first international match; she participated in the Superball in the Czech Republic before, at which she came fourth. “At the Superball, all the best freestylers of the world meet to see each other, train with each other and mostly to battle each other. The real superstars in this world are over there, like Luca, Ricardinho, Brynjar and Szymo. It is a real tight-knit group, they sort of feel like family, even if I have only known them for two years. When they are in the Netherlands, I always make sure to meet them and otherwise we thoroughly stay in touch online.

No more ‘just’ football
You do not just become the best female freestyler of the Netherlands. “If I could train for six hours a day, I would. It’s that addictive! However, because of my studies I’m not able to; I’m very busy with my exams and other assignments.”
‘Other freestylers often recognise me on the streets’
Her ball-skills have not always been self-evident: Jasmijn played football from the age of eleven before she began freestyling. “After two years with the C-team of FC Twente my motivation completely went out the window. I really needed a change and then I accidently stumbled upon an advert of a freestyle workshop. That was a year or two ago. I have always found tricks interesting so I decided to go to the workshop. I was immediately sold and I have never been on the football fields again. I never want to think of the complaints and demands of your team members and coach again.”

Cool assignments
Jasmijn is looking forward to focus on the sport full time after her studies. “This is my real passion; I can’t imagine a life without freestyle and the people connected to it. The nice reactions I get make it even more fun; it’s becoming more regular that I’m recognised on the streets by starting freestylers, asking for a picture or my autograph. Then they say I’m an inspiration to them and ask me if I have tips. And that you can make some money with it is also great! Because of school, this isn’t a real job for me, but I run shows and workshops every now and then. That’s how I ran a show during the women’s match between England and Bosnia in England.
Jasmijn can be found in a commercial by Huawei and Ajax with professional football players Jaap Stam, Edgar Davids en Lasse Schöne. “For the commercial I had to pretend I was a production assistant. The men were filmed while they were trying out tricks and when the ball flew away I had to unexpectedly show up and show my tricks. Their surprised reactions were filmed and after that we freestyle for another twenty minutes together. That was a really cool assignment!”